The Tigers have made four changes in their squad. Mahedi Hasan, Soumya Sarkar, Abu Hider Rony and Yaesin Arafat Mishu have been excluded.

Bangladesh had a great chance of winning back-to-back matches in the T20 tri-series. But Mohammad Nabi’s 84* and Mujeeb Ur Rahman’s maiden T20I four-fer ensured that Afghanistan beat them by 25 runs at the Sher-e-Bangla National Stadium. The hosts are currently in the middle of the table and are next set to play Zimbabwe at the Zahur Ahmed Chowdhury Stadium in Chattogram.

A victory in the game will confirm them a spot in the final along with the Afghans. However, Shakib Al Hasan’s men would be aware of the threat Zimbabwe posed in the first game and hence, won’t want complacency to sneak in. The Tigers have made four changes to their squad. Hamilton Masakadza and Co, on the other hand, have shown fight, yet the results haven’t gone in their favour.

The track in Chattogram is a kind of a mixed bag with an average T20I score of around 148. But the venue hasn’t hosted a T20I here since March 2014. In the ongoing series, the team batting first has got a fair bit of advantage. Hence, batting first should be way forward. The conditions will be cloudy, but the heavens aren’t expected to open up. The temperature will be around 29 degrees Celsius.

The decision to send Mushfiqur Rahim to open didn’t work and he might go down to his middle order position. There’s no Soumya Sarkar in the squad, which means that Nazmul Hossain Shanto is likely to open the batting with Liton Das. Shanto had a decent time for the Bangladesh Emerging XI with scores of 77, 133 and 88*. Shakib Al Hasan has under-performed going by his standards.

Mahmudullah is seeming to find his rhythm back, but is yet to get back to his best. Sabbir Rahman couldn’t carry on after a couple of starts. In the bowling area, Mohammad Saifuddin has been the standout. Mustafizur Rahman has been frugal, but has gotten only a solitary wicket. Afif Hossain is a decent bowler as well, but it’s surprising to see him not bowl. Taijul also has to be more penetrative.

Zimbabwe’s bowling has been a tad poor in the series, especially at the death. Kyle Jarvis and Tendai Chatara have picked up wickets, but have economy over 10.50. Ainsley Ndlovu and Neville Madziva have also conceded runs, not making much breakthroughs. Sean Williams has flattered to deceive with the bat, having scored only two runs, but he is their standout bowler with an economy of 6.71.

Brendan Taylor has thrown his wicket away after threatening at the top. Craig Ervine is yet to fire on all cylinders. There’s a chance for Regis Chakabva to get a promotion after he got an unbeaten 42 versus the Afghans, though it came in a losing cause. Ryan Burl has been a big positive as after his fifty in the first game, he turned up with another brisk knock. He has 82 runs at a strike-rate of 143. 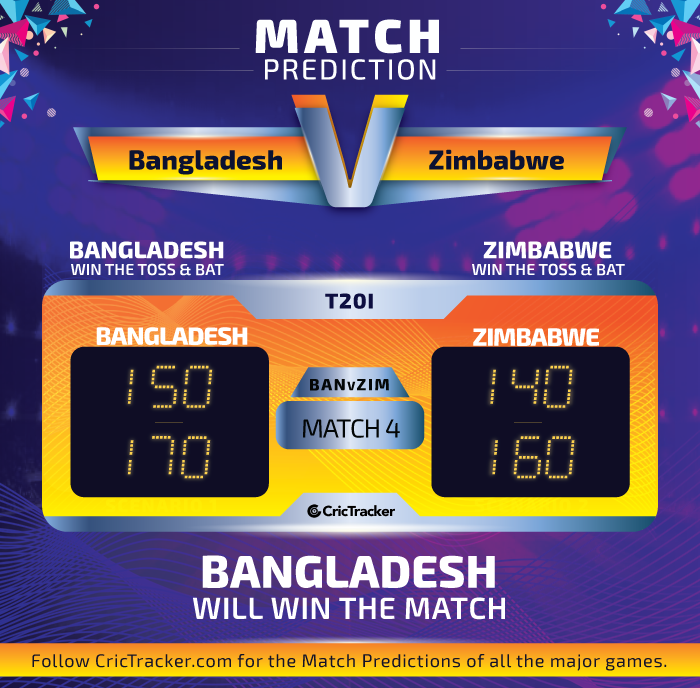