Birmingham Phoenix and Welsh Fire are all set to cross swords in the 23rd match of the Women’s Hundred at the Edgbaston in Birmingham. The Phoenix are in a lot of strife as they are in a three-match losing streak.

In their previous match, Oval Invincibles thrashed them by eight wickets. The team, led by Amy Ellen Jones, are placed right at the bottom of the points table.

The Fire, on the other hand, need a win to get into the top two. They had won two games in a row against Manchester Originals and the Invincibles. However, they faced defeat against the Trent Rockets.

The pitch at the Edgbaston has been a decent one for batting. Run-making hasn’t been all that tough. However, it has favoured the chasing teams to a large extent. Therefore, batting second should be the way forward for both teams.

Avg first innings score: 134 (3 matches in the Hundred at Edgbaston)

Hayley Matthews has been outstanding for the Fire in the ongoing edition of the Women’s Hundred. She has been one of the major reasons behind her team’s two wins thus far. The West indies’ batter has notched 183 runs at an average of 45.75 and a strike rate of 127.97. She has a top score of an unbeaten 71.

While her performance with the bat has been stupendous, Matthews hasn’t flattered to deceive even with the ball in hand. She’s been the standout performer for the Fire with her slow off-breaks. In five matches, she has picked up seven wickets. Her economy rate of 1.05 is the best among her teammates. The Fire will be hoping for her to deliver. 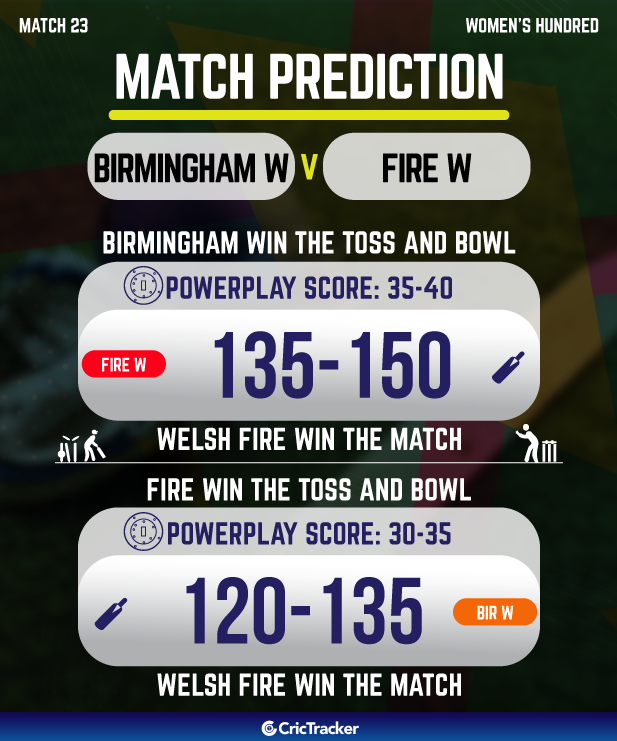