The Originals are yet to open their account in the tournament.

The Manchester Originals will take on the Northern Superchargers in the ninth match of the Hundred Women’s 2021 on Wednesday (July 28).

The Superchargers have been on a roll and are seated at the top spot in the table, having won both their encounters thus far. In quite a contrasting campaign, the Originals have lost both their fixtures and are sixth amongst eight teams, separated only on behalf of their marginally superior net run rate.

The Superchargers chased down 131 with six wickets intact against Welsh Fire in their opening game, which was followed by a 27-run victory over Trent Rockets, whereas the Originals lost their recent encounter against Birmingham Phenix by 20 runs after their five-wicket loss in the tournament opener against Oval Invincibles.

The track in Manchester has been assisting the spinners, with rather low-scoring encounters unfolding. In the only women’s fixture at the venue so far, the Birmingham Phoenix posted 113/9 before restricting the Originals to 93/8. Even the latest international encounter at the venue, the third T20I between Pakistan and England, was moderate in terms of scoring, with Pakistan setting 155 for England to win, which they chased as late as the final over.

Jemimah Rodrigues has lit up the 100-ball tournament with her sensational batting. She belted a 43-ball 92 with 17 fours and a six against Welsh Fire and followed that by another good show against Trent Rockets, where she got a 41-ball 60. Given her form, she might well break Manchester’s low-scoring monotony.

Rodrigues’ Indian counterpart Harmanpreet Kaur is arguably another one of the tournament’s most exciting prospects. While too little has gone Originals’ way, if Kaur could make her bat talk alongside Lizelle Lee and Migon du Preez, she might lead her team to open their account on Thursday. 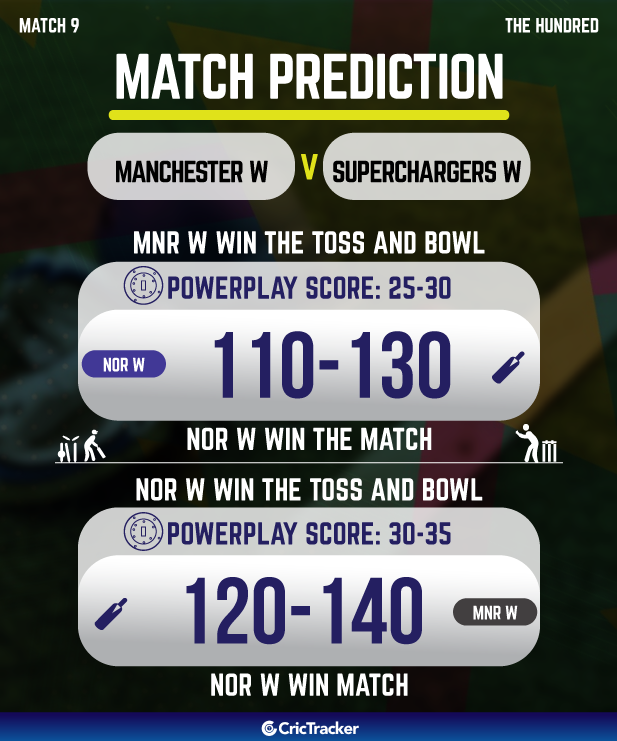