The Indore-born all-rounder has the calibre of shuffling his batting position according to the persisting situation.

Cricket has always been an unforgiving sport. Ever since the upsurge of Indian cricket, fans have witnessed many young prospects donning the Indian jersey and proving their mettle on the international stage. However, the appalling truth- probably in most cases- is that many starlets eventually have to adrift from their dream to represent India at the international level.

The bitter competition and immense growth of the sport across the nation has witnessed many deserving players getting sidelined from clinching a much-deserving berth in the Indian side. The abundance of contestants lined up to break into the national side has soared requisites of the selection process by leaps and bounds.

Despite delivering consistent performances in the domestic circuit, several players have no choice but to face the wrath of being overlooked by the national selectors. ‘The Jalaj Saxena’ story is an epitome of such instances. One of the most-consistent all-rounders -Jalaj Saxena- who still anticipates to finally break into the Indian side after giving staunch performances for more than a decade. Saxena has all the stats in his favour. Considering the right-hander’s recent display in the domestic circuit, not many would point a finger to argue that his continued omission from India squad is no less than a travesty.

While flourishing as an outstanding all-rounder over the years, Saxena has certainly bolstered his Ranji Trophy records since the 2015-16 season. However, with a career that is eventually transforming into a poignant one, Saxena’s absence in the Indian squad does not justify the 33-year-old‘s accolades in the domestic circuit. While increasing the prospect of breaking into the Indian squad, Saxena has paved his way to the top of the list of highest wicket-takers in Ranji Trophy since 2015-16. 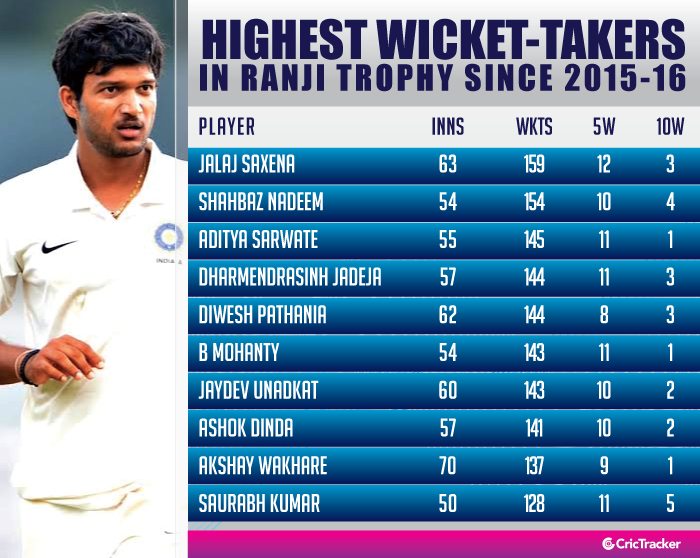 This is a list of the highest wicket-takers in Ranji Trophy since 2015-16. Jalaj Saxena tops the list. Shahbaz Nadeem close behind – which is why it was so heartwarming to see Nadeem finally get a Test debut. Saxena's stats are slightly better than Nadeem's even, though. pic.twitter.com/saPokA4TmQ

Saxena has 159 scalps under his belt in 36 matches at an impressive economy of 2.53 along with 12 five-wicket and 3 ten-wicket hauls. The off-break bowler tops the elite list by toppling Shahbaz Nadeem to the second position. It was a heartwarming moment for several fans to witness Nadeem don the Test cap for India.

Saxena, on the other hand, anticipates his moment-of-a-lifetime with eager eyes. Drawing comparisons between both the stalwarts of the domestic circuit- Nadeem and Saxena- the latter emerges as a better alternative in the race to wear the prestigious Indian jersey. However, Jalaj Saxena’s career- a journey which threatens to go down the rabbit hole- is too magnificent to be ignored.

The Indore-born all-rounder has the calibre of shuffling his batting position according to the persisting situation. Saxena, who played for Madhya Pradesh and then switched to Kerala, has adapted many tricks in his pursuit of excellence. Over the years, Saxena has incorporated carrom ball, googly and leg-spin alongside his regular off-break deliveries. With an abundance of variations in his arsenal, Saxena can also play a pivotal role with the bat while opening the innings or coming down the order.

Taking into account Saxena’s enrichment over the years, many fans will be filled with remorse after knowing that the 33-year-old has played only two matches for India A- both this year- after being called up as a replacement. In an illustrious First-class career, Saxena has etched a plethora of records to his name over the years. 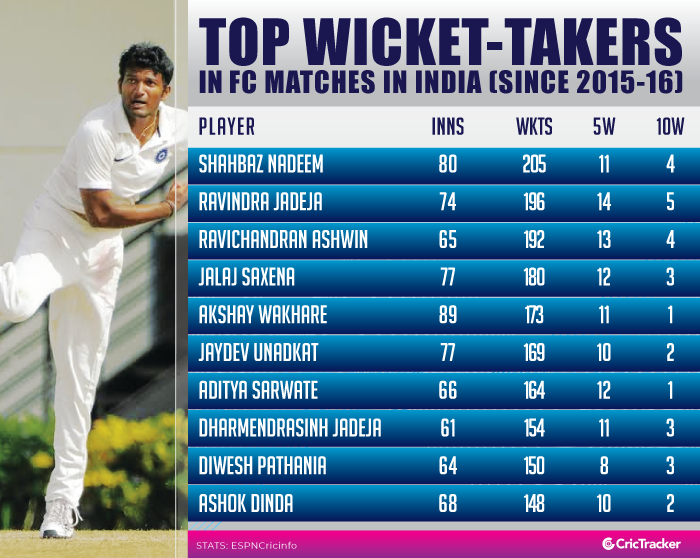 Expanding that list to include all first-class matches played in India since 2015-16 (which brings Test matches into the ambit as well as India A, Duleep, Irani etc). The top wicket-takers have Ashwin, Jadeja, Nadeem – followed by Saxena and Akshay Wakhare. pic.twitter.com/cMptZzqhPu

In all First-class matches played in India since 2015-16, Saxena has given many stalwarts a run for their money due to his impressive wicket-taking record. He is currently poised fourth in the list with 180 scalps- only behind the likes of Shahbaz Nadeem (205), Ravindra Jadeja (196) and Ravichandran Ashwin (192). Saxena has been among the best bowlers in India for the past four-five years along with being a competent top-order batsman. To the dismay of many pundits and fans, the all-rounder has been constantly been overlooked for a much-deserved place in the Indian team.

Indian cricket has often been plagued with a dearth of match-winning all-rounders. Setting himself apart from being a run-of-the-mill player, Saxena’s wicket-taking record is phenomenal. He has taken most wickets in the list of players who have scored 2000+ runs in Ranji since 2015-16. Only Parvez Rasool (116 scalps) is anywhere close to the off-break bowler. Saxena has also picked up 180 wickets in 45 matches in First-class cricket- something which weighs his probability of knocking the national team’s door. 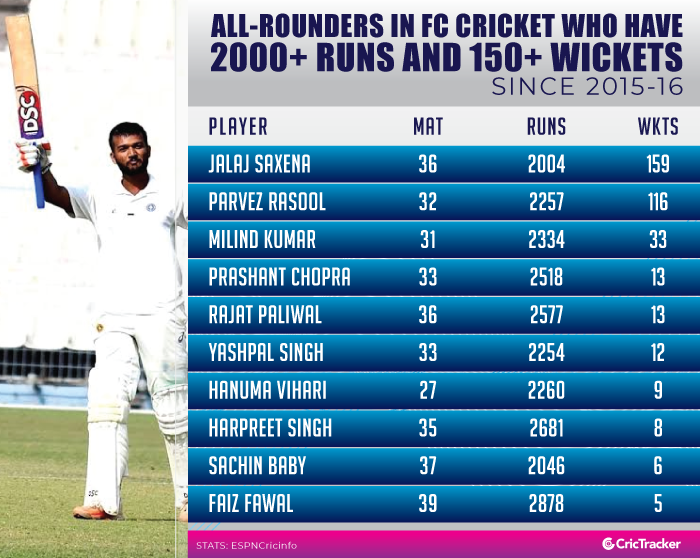 Remarkably, Saxena has been among the best bowlers in India for the past 4-5 years, *while also being a competent top order batsman*, which is quite something. List of those who have 2000+ runs in Ranji since 2015-16, sorted by wickets. The stats speak for themselves. pic.twitter.com/ewFAt4YLok

It’s an appalling fact that in the process of constant cutting and chopping of the Indian team, the selectors have failed to notice the Kerala batsman’s forte. Saxena set ablaze the Ranji Trophy 2012-13 season with his prolific run-scoring form. He mustered 769 runs at an average of 69.90, which included two tons too. It was his run-scoring spree at that time which earned him his India A call-up.

Saxena’s majestic all-round record isn’t confined to the likes of domestic cricket. His impressive record- which he can flaunt in front of many world-class players- also is head and shoulders above many eminent all-rounders at the international level. In a unique list, Since August 1, 2014, there are only five all-rounders on the international stage who have the combination of 3000+ runs and 150+ wickets. Saxena is currently sitting third in the list with Moeen Ali topping the table with 210 wickets and 3960 runs. At present, Saxena has 200 wickets and 3015 runs to his name in 55 matches. 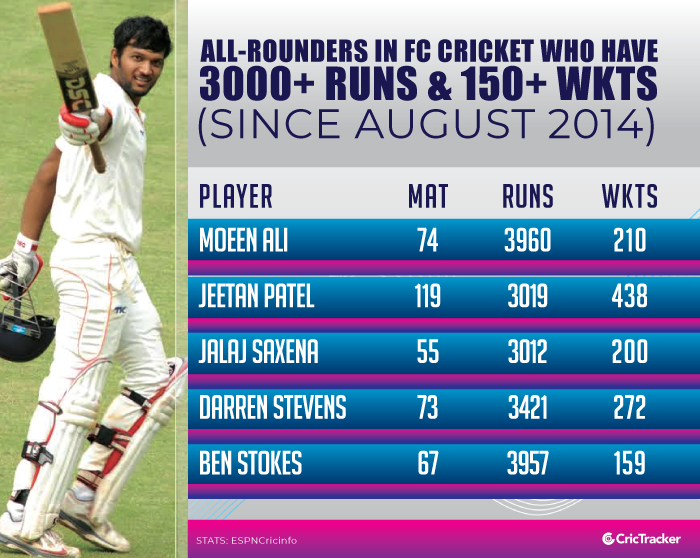 An addendum that's possibly more eloquent, numbers wise, than all of the above. Since August 1, 2014, there are only five allrounders in *world cricket* who have the combination of 3000+ runs and 150+ wickets. Jalaj Saxena is one of the five. Some good company there: pic.twitter.com/gWxy6VWo3G

Someone who still persists to be hopeful for the prestigious India call up- Saxena had admitted that he used to get frustrated half a decade ago for not getting the India cap. However, the right-hander has instilled over the years that the selection is not in hands. Saxena has no other choice than to be on his toes while waiting for the once-in-a-lifetime opportunity of donning the Indian jersey.

However, the question which intensifies the debate over Jalaj Saxena getting unnoticed is – How much more can a player hustle in the race of a national call-up, especially after being overlooked for more than a decade. Most players have a stipulated window of their ‘prime’ in the sport.

The situation transforms into a dreadful one when a player, who has amassed over 6000 runs in 118 First-class matches has to relentlessly aim to burst on to the international stage. Adding more feathers to his cap, Saxena has also picked up 325 wickets in his First-class career including 19 five-wicket and 5 ten-wicket hauls. Time alone will tell if the world will witness a new chapter in the Kerala stalwart’s estimable First-class and List A career.