This Sunday night, Kolkata Knight Riders met Kings XI Punjab in the Final of Indian Premier League 2014. The world saw a rising star Wridhiman Saha score a brilliant century – first one in the IPL Finals. This was also the first T20 century by an Indian Wicket-Keeper in T20s. Unfortunately, Kings XI bowlers could not stop Manish Pandey whose 94 saw Kolkata chasing 200 with the loss of 7 wickets and lifting the Gold twice in three years.

Taking an inspiration from Saha’s brilliant century but in a losing cause and that too in a tournament final, here is a list of Top 5 ODI centuries in tournament finals that despite a good effort couldn’t win the Trophy for their team.

It was the 3rd Final of the World Series between Australia, India and New Zealand. The score-line was level at 1-1. Australia batted first at the MCG and posted 235 for four. Although Wright and Edgar gave New Zealand another excellent start, putting on 85 in 24 overs, and runs continued to come at a rate which made a New Zealand victory possible, such a result always seemed just against the odds. Edgar, with a splendid hundred to his name, was not out at the end. After some good blows by Parker, Trevor Chappell came on to bowl the last over with 15 still needed and four wickets left. Hadlee straight drove the first ball for 4 and was lbw to the second. Smith then hit two 2s before being bowled, swinging at the fifth ball, leaving New Zealand with 6 to tie off the now infamous underarm delivery.

It was the first time a century was scored in a losing cause in a tournament final. 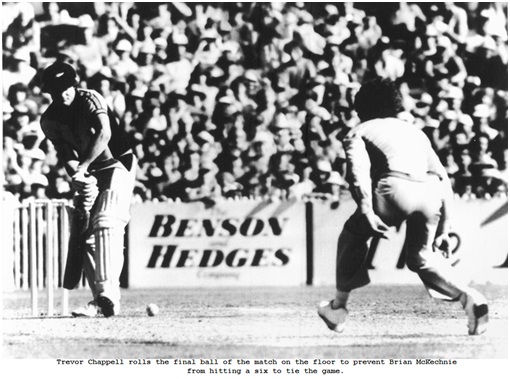