Shai Hope has scored 378 runs as an opener in four ODI innings at an average of 189.

Ireland will be hosting Tri-Nation ODI series which involves the Windies and Bangladesh who will warm up for the World Cup starting at the end of May. This Tri-series will be played in the round-robin format with all three teams playing four games apiece before the final. The two venues in Dublin will be hosting all the seven matches of this ODI tournament. The first game will be played on Sunday between the hosts and the Windies.

Ireland nearly took down the No.1 ranked ODI team England on Friday as the debutant Josh Little bagged a 4-wicket haul. In pursuit of a target of 199 in the 45-over game, the English side was reduced to 66/5 and further six down for 101 but chased down without losing any more wickets. Ireland will be facing the Caribbean boys in the tournament opener. The visitors are keen on sorting out their bowling woes ahead of the big event.

The first game of the Ireland Tri-Nation ODI Series, 2019 between Ireland and Windies will be played at the Clontarf Cricket Club Ground in Castle Avenue, Dublin.

The match starts at 10:45 AM local time (9:45 AM GMT) (3:15 PM IST). The game can be streamed live on Rabbithole Entertainment’s YouTube channel in India.

Dublin’s Castle Avenue has hosted only two matches since the last World Cup. Bangladesh and New Zealand faced twice here during the ODI Tri-series ahead of the 2017 Champions Trophy. Scores of 270 and 257 were chased down with ease in that tournament and the trend could continue on Sunday.

(Will be added when there an update.)

Shai Hope is set to open the innings in the absence of Chris Gayle. The Keeper-batsman has a batting average of 189 in the ODI format while opening. In the four ODI innings as an opener, Hope amassed 378 runs with two unbeaten tons and a fifty. During the 2018/19 season, Shai aggregated 662 runs in 12 ODI innings with three tons and two fifties at an average of 73.55.

Shai Hope and Jason Holder’s recent success in the ODI format will make them the ideal choices for captain and vice-captains. The experience of Paul Stirling might come handy against the Windies pace-attack. Josh Little might be only one ODI old but can be a good pick for a multiplier option given the number of right-handers in the Windies line-up. 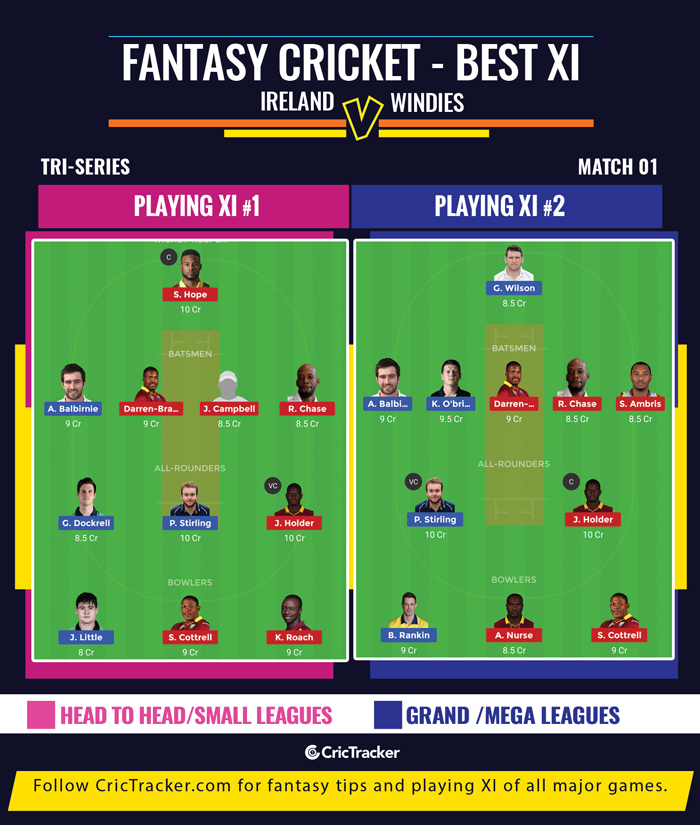 Dream11 extended the deadline during the Ireland-England as it got a delayed start. The likes of Stirling, Balbirnie, Hope, Bravo and Ambris will be perfect from the batsmen’s category if the game is reduced to 40 or fewer overs due to rain.

Windies might get a tough fight from Ireland but are expected to take the first points.