All the major stats and numbers that were recorded during the U19 Asia Cup final:

India U19 team followed the footsteps of their senior side as they won the Youth Asia Cup with a convincing win over Sri Lanka in the final. After winning the toss, openers Yashasvi Jaiswal (85) and Anuj Rawat (57) put on a 121-run opening stand. Skipper PrabhSimran Singh (65*) and Ayush Badoni (52*) gave a perfect finish by adding 110 runs for the 4th wicket in just 55 deliveries. Chasing 305 to win, Sri Lanka U19 were bowled out for only 160 with left-arm spinner Harsh Tyagi taking 6/38 in his ten overs.

All the major stats and numbers that were recorded during the U19 Asia Cup final:

4 – This game is only the second instance of four Indian batsmen scoring fifties in a Youth ODI match. As many as four Indians scored fifties during the 2004 U19 CWC game against Scotland as well.

6/38 – Harsh Tyagi’s 6/38 is only the second six-wicket haul in a Youth ODI tournament final. India’s Abu Nechim Ahmed took 6/9 in a Tri-Series final in 2007 against Bangladesh. 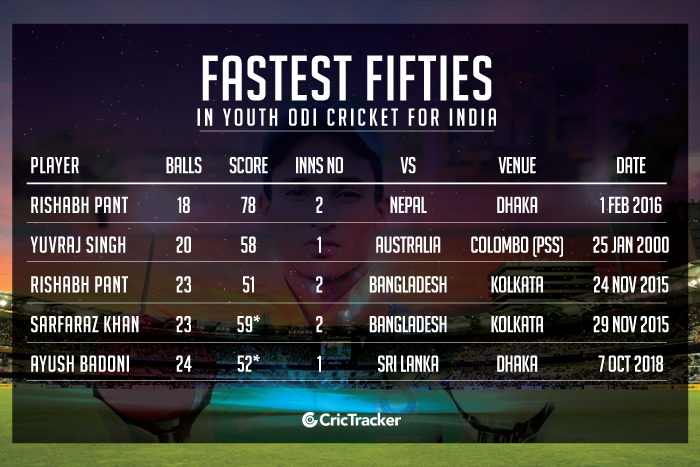 24 – Badoni’s 24-ball fifty is also the 2nd fastest by any player in a Youth ODI tournament final. Sarfaraz Khan’s 23-ball half-century against Bangladesh came in the Tri-nation series final. No Indian player at ODI level (Men’s ODI and Women’s ODI) have scored a fifty faster than Sarfaraz and Badoni in a tournament final.