The right-arm pacer made a notable comeback with a 4-wicket haul.

Umesh Yadav returned to the Indian playing XI following some rest after a long tiresome year where he featured in almost every Indian game. The right-arm pacer made a notable comeback with a 4-wicket haul and helped the Indian team to restrict Australia down to 334/6 after the visitors were off to a flying start on the back of a 234-run opening stand between David Warner and Aaron Finch.

Once Warner got out for 124, Umesh Yadav got rid off Finch in the very next over after conceding 37 runs in his first five overs. This was the fifth time in ODIs when Umesh claimed Finch’s wicket and has conceded 82 runs against the Australian. In the subsequent over, Aussie skipper Steven Smith fell after scoring just three runs. This was the 3rd time Smith got out to Umesh in ODIs; the joint-most times he has got out to any bowler along with Stuart Broad and Adil Rashid.

This was the 7th time Umesh got the wicket of Smith in International cricket with only Broad (9) has dismissed Smith on more occasions. This wicket was also the 100th in ODI cricket which made him the 18th Indian bowler to reach the milestone. Overall, Umesh is the 11th Indian pace bowler to accomplish the 100 wickets milestone in ODI cricket.

By completing 100 ODI wickets in just 71 matches, Umesh became the 6th fastest Indian to reach the milestone. Irfan Pathan was the fastest to the feat as he got there in only 59 ODIs, which puts him among the top ten bowlers fastest to 100 ODI wickets. Mohammed Shami, who is currently playing in his 50th ODI has 91 wickets and has a chance to file his name as one among the top five. 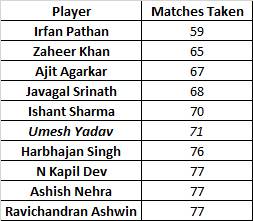