Prashant Solanki is a good budget pick from the bowlers at 8.5 Cr.

The final match of the Vijay Hazare Trophy 2020-21 will be played between Uttar Pradesh and Mumbai on 14th March at Arun Jaitley Stadium in Delhi.

Uttar Pradesh will be up against Mumbai in the final match of the Vijay Hazare Trophy 2020-21 on Sunday. Uttar Pradesh are playing their second final in the Vijay Hazare Trophy. In the last time they qualified for the finals, Uttar Pradesh lost to Railways. This will be an excellent opportunity for them to win their maiden title. They entered this year’s final by beating two giant teams Delhi and Gujarat in the quarter-final and semi-final respectively. A lot of credit should go to their batsmen, especially Upendra Yadav, Karan Sharma and Akshdeep Nath.

Meanwhile, the three-time champions Mumbai are aiming to win their fourth title. After suffering heartbreak in the Syed Mushtaq Ali, they made a Pheonix-esque comeback and haven’t lost a single match in this tournament, which shows why they are one of the most dangerous teams in the country. They dominated the opposition in all the matches. Prithvi Shaw is in impeccable form at the moment and there is no stopping him in this tournament. Even their bowlers are backing up the batsmen really well.

UP vs MUM Weather Report for Final:

It will be partly cloudy in Delhi at the start of the match and the sun is expected to come out in the afternoon. The maximum temperature will be hovering at 31 degrees Celsius and the humidity level is 48 per cent. There is no chance of precipitation for this match.

The surface here at the Arun Jaitley Stadium is a balanced one, where batsmen will enjoy batting in the first half of the game. As the game progresses the wicket might get slow down and spinners will become handy during that period. Patience will be the key for the batsmen here, oas nce they are settled, they can score runs easily since the boundaries are smaller compared to the other venues.

Also Read – ‘Where is Corona?’ – Aamer Yamin takes a dig at the Ahmedabad crowd during the first India vs England T20I

UP vs MUM Top Picks for Today’s Dream11 Match:

Uttar Pradesh’s stand-in skipper Karan Sharma played a sensible knock against Delhi in the quarter-finals, scoring 83 runs. He followed up with a crucial 38 runs in the semi-finals against Gujarat. Overall in this tournament, he has scored 225 runs in 7 matches at an average of 32.14 and has picked up 3 wickets as well.

Akshdeep Nath was the player of the match in the semi-finals against Gujarat for his 71 runs in the run-chase. He is the leading run-getter for Uttar Pradesh in this competition, with 332 runs in 7 matches at an average of 55.33, with the highest score of 93. He has also scalped 3 wickets at an economy of 5.7 runs per over.

Wicketkeeper Upendra Yadav played an outstanding knock of 112 runs in the quarter-finals against Delhi when his team needed him the most. He remained unbeaten on 31* in the semi-finals. Overall in this tournament, he has scored 276 runs in 7 matches at an average of 69.

20-year-old Shivam Sharma is the leading wicket-taker in this tournament, picking up 20 wickets in 7 matches at an economy of 4.22 runs per over with the best figures of 7/31.

Prithvi Shaw has broken the record of most runs scored in a single season in this Vijay Hazare Trophy. He has scored 754 runs in just 7 matches at an average of 188.5, with the highest score of 227*.

Shams Mulani was promoted up the order against Karnataka in the semi-finals and he played a supporting hand of 45 runs from 71 balls. With the ball picked up the important wickets of Karun Nair and Sharath BR. Overall in this tournament, he has scored 55 runs and picked up 9 wickets at an economy of 4.9 runs per over.

Yashasvi Jaiswal got out early in the semi-final game against Karnataka, but he is a talented young guy who can score runs in the finals. In this tournament, he has scored 179 runs in 7 matches at an average of 25.57 and has even picked up 2 wickets at an economy of 5.77 runs per over.

Also Read – India vs England: Uttarakhand Police takes a dig at Virat Kohli for getting out on a duck in the first T20I

Suggested Playing XI No.1 for UP vs MUM Dream11 Fantasy Cricket: 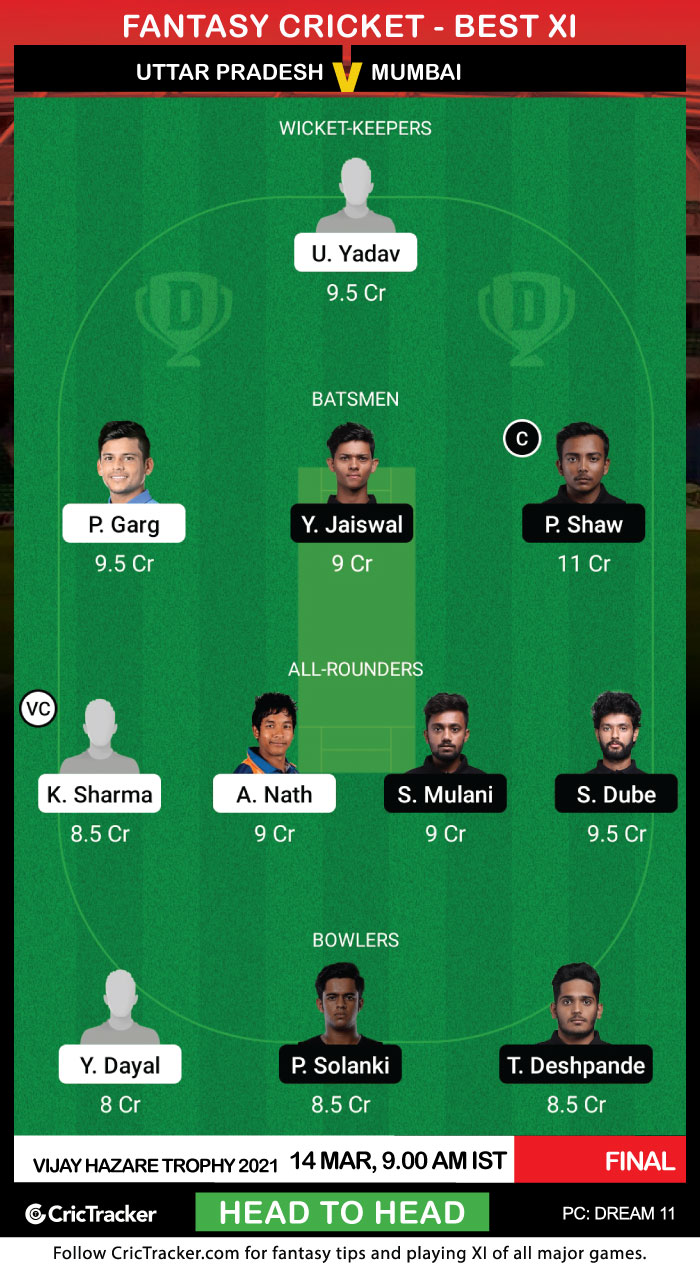 Suggested Playing XI No.2 for UP vs MUM Dream11 Fantasy Cricket: 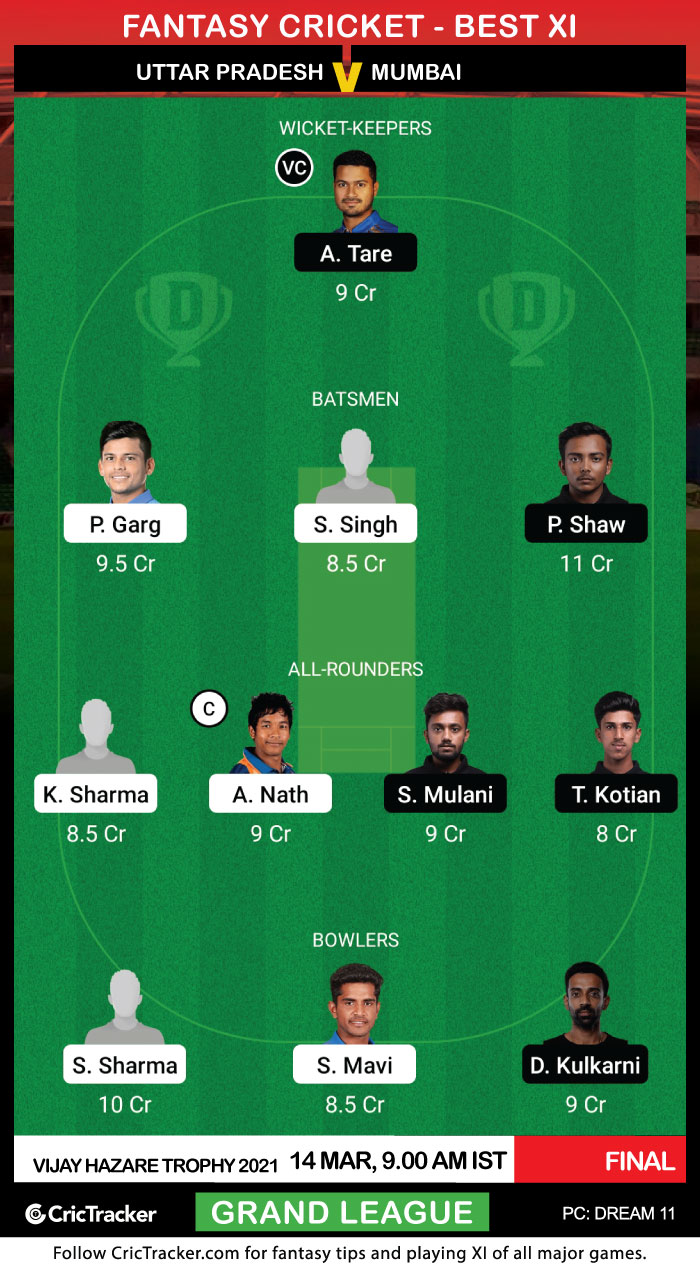 Prashant Solanki is a good budget pick from the bowlers at 8.5 Cr. He has picked up 14 wickets in just 5 matches with the best bowling figures of 5/48.

Today’s UP vs MUM Probable Winners: