Virat Kohli-led Team India is having some fun time in Mumbai ahead of the England tour.

India skipper Virat Kohli and the rest of the squad members are currently undergoing mandatory 14-day quarantine in Mumbai. The players are keeping themselves engaged either by sweating it out indoors or unveiling their jersey ahead of the ICC World Test Championship final (WTC) against New Zealand starting on June 18. Meanwhile, Kohli decided to have some fun with the fans by engaging in a Question-Answer session on Instagram on Saturday, May 29.

As soon as the 32-year-old posted, fans started to flood him with a plethora of questions which included what he Googled last, which bowler from the past era would have troubled as a batter, and about his favorite cheat meal.

Among the numerous questions, one fan came up with an interesting question regarding which Kohli had an honest and straightforward answer. The question was: One secret about the Indian cricket team which he can share.

The Indian skipper replied by saying, we are actually a bunch of pranksters. Well, this answer from Kohli is not one bit surprising as he has revealed a lot about the pranks Indian team members indulge in various interviews. 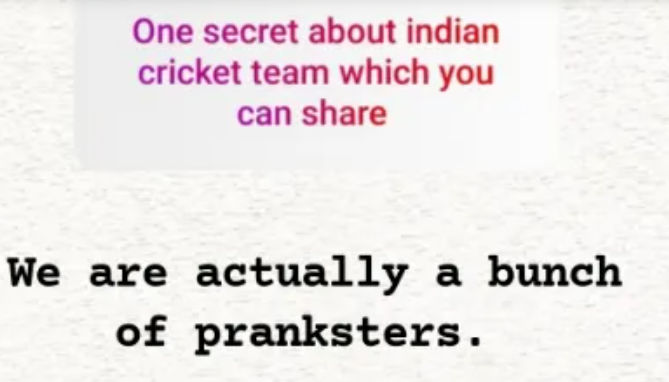 Recently, the 32-year-old also shared one incident from the past in one of the interviews about how Irfan, Pathan, Munaf Patel, Harbhajan Singh and Yuvraj Singh played a prank by telling him to fall on Sachin Tendulkar’s feat when he was new in the team.

In the present team too, there are a lot of pranksters such as Rishabh Pant, Hardik Pandya and Ravindra Jadeja who always keep the spirits of the team upbeat.

India optimistic about performing well in the WTC final

During their stupendous run of form in the ongoing WTC cycle, India lost just to Blackcaps in January 2020 in their own backyard. The unexpected loss shook fans and experts alike due to India’s potent pace attack at their disposal. The WTC finals is going to be played out at The Ageas Bowl in Southampton and India will surely love to end their recent ICC Trophy draught.