Watch these two equally strong teams unleash carnage over one another in the Final Match of IPL 12 this Sunday at 07:30 PM IST on YuppTV.

The season 12 of the Indian Premier League (IPL) will come to an end with the final match between CSK and MI on 12th of May 2019. 56 League matches and 3 Qualifier matches have been played between 8 teams for the strongest teams to survive and enter the finals. The final match is organized in Rajiv Gandhi International Cricket Stadium in Hyderabad at 07:30 PM IST on Sunday, 12th of May.

CSK and MI’s route to the final 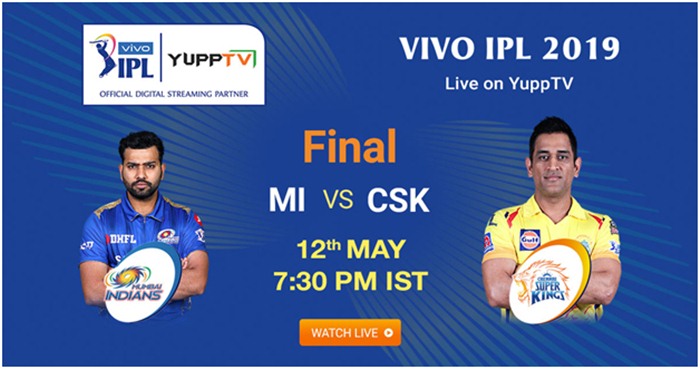 Chennai Super Kings was the first team to have qualified for the playoffs and has stayed on top of the points table for most of the season. CSK has finished the leagues in the second position with 18 points and a positive 0.131 NRR (Net Run Rate). Delhi Capitals has entered the playoffs for the first time after 2012 and stood third in the points table with 18 points and +0.044 NRR.

Mumbai Indians were the third to reach the playoffs but completed the leagues with 18 points and 0.421 NRR. Sunrisers Hyderabad has entered the playoffs with just 12 points which is the lowest number of points for a team to enter the playoffs in the history of IPL. Three teams SRH, KKR, and KXIP earned 12 points but SRH qualified for the playoffs with the highest Net Run Rate of +0.577.

Mumbai Indians and Chennai Super Kings played in the first Qualifier in which Mumbai stood victorious and entered the finals. Delhi Capitals and Sunrisers Hyderabad played the Eliminator match in which Delhi defeated the Sunrisers team to enter the Qualifier 2. CSK and DC played the Qualifier 2 and Chennai Super Kings defeated the Delhi Capitals team to enter the finals against Mumbai Indians.

One can observe that CSK has been the most consistent team in IPL 12 with continuous victories. The team comprises veteran players like MS Dhoni (Captain), Suresh Raina, Dwayne Bravo, Imran Tahir, Faf Du Plessis, Harbhajan Singh, Ambati Rayudu, Ravindra Jadeja, etc. The team under MS Dhoni’s captaincy has always performed to the best of its abilities which was evident in CSK entering the finals. But CSK had lost all three matches against MI in IPL 12. While this may act as a fantastic motivator, it might also inhibit the team’s confidence to a certain extent.

Mumbai Indians on the other hand, have stumbled in some matches since the beginning but have finished the leagues on top. The team comprises of Rohit Sharma (Captain), Kieron Pollard, Suryakumar Yadav, Quinton De Kock, Jasprit Bumrah, Hardik Pandya, Lasith Malinga, etc. It is one of the strongest teams of IPL 12 and players like Rohit Sharma, Hardik Pandya, Kieron Pollard, and Lasith Malinga have performed amazingly in the series. While the team has already defeated CSK every time in IPL 12 which can be a great motivator and boost of confidence, beating CSK in the finals is going to be a tough job.

Watch these two equally strong teams unleash carnage over one another in the Final Match of IPL 12 this Sunday at 07:30 PM IST on YuppTV. Chennai Super Kings vs Mumbai Indians IPL Final Match Live is available on YuppTV in Continental Europe, Australia, Singapore, Malaysia, South America, and South East Asia.