Western Australia are expected to remain at the pole position by beating Tasmania.

The 5th match of the Sheffield Shield 2020/21 will be played between Western Australia and Tasmania at the Park 25 No.2 in Adelaide on Friday.

Western Australia have got a great start in their 2020/21 Sheffield Shield campaign. They started their season out with a thumping 205-run win against South Australia. After that, they had to settle for a draw against a strong New South Wales outfit.

With momentum on their side, they will now face the threat of Tasmania. Tim Paine’s side had a nightmarish start to their campaign, with an innings plus 59 runs defeat against Queensland. However, they showed great character in their last game against South Australia. Though the game ended as a draw, Tasmania were by far the dominating force.

The Park 25 No. 2 pitch favours the batsmen more than the bowlers. Anything under 350 should be considered a poor batting display in this track.

392 (All the games played at this venue in this tournament)

Sam Whiteman has scored 197 runs in just 3 innings so far. He has an impressive average of over 65. The Western Australia batsman has already registered a century and a half-century to his name.

Beau Webster has scored 107 runs from 3 innings, which includes 1 half-century. He has also been impressive with the ball and has scalped 5 wickets.

Matt Kelly has picked up 4 wickets in the first couple of matches. He can also contribute with the bat and has scored 89 runs in the only time he got a chance to bat so far.

Tim Paine scored a stunning 111 not out in the game against South Australia. So far in this season, he has maintained a superb average of over 60.

Cameron Green has scored 264 runs from 3 innings, which includes an astonishing knock of 197 runs. He has also scored a half-century and has an average of 132. 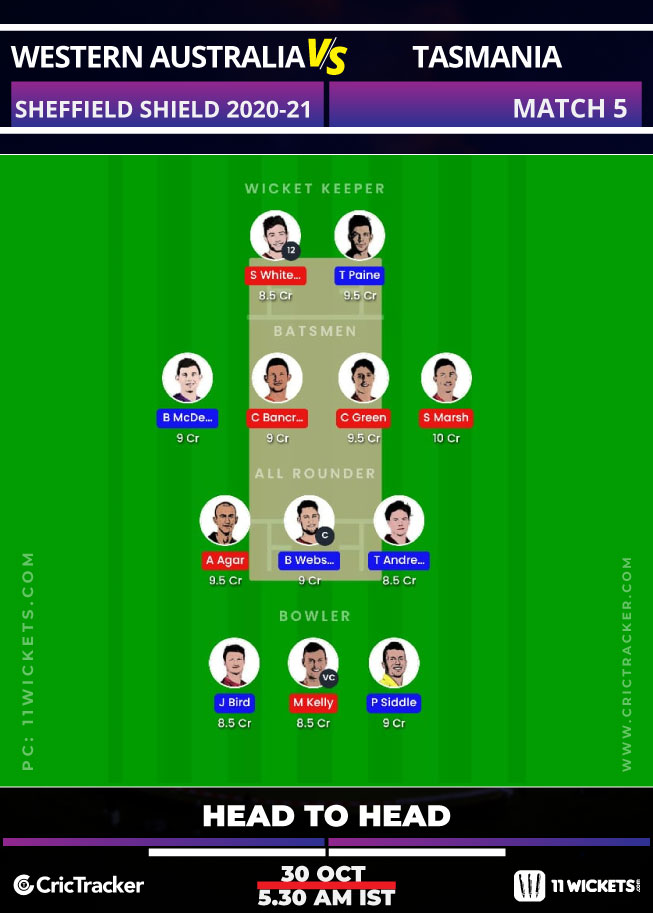 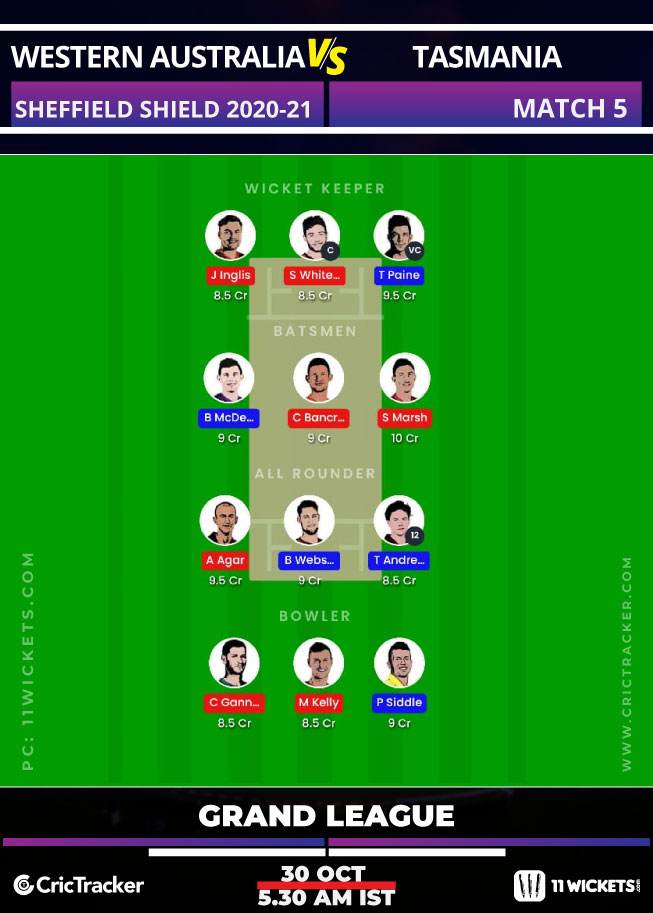 Ashton Agar has been Western Australia’s best bowler by far. He has picked up 9 wickets, which includes a 5-wicket haul. With the bat, he has scored 139 runs from just 2 innings. He is a must-pick for both of your 11Wickets Fantasy teams.

Western Australia are predicted to win this match.