The 12th edition of the cricket World Cup is set to kick off on May 30 with a game between England and South Africa. The tournament will continue till July 14 when the final will be played at the Lord’s. Ten teams are participating in this edition and it is the first time that not all Test-playing sides will feature in the World Cup (Zimbabwe and Ireland missed out). The tournament will see all teams playing against each other, something happening for the first time since 1992 and the top four point-getters will qualify for the last four.

Windies will be playing their first game against Pakistan at Trent Bridge, Nottingham, on May 31. The two-time champions and one-time finalists had qualified for the World Cup as the 10th team after losing the qualifiers’ final to Afghanistan last year. Winners of the first two editions in 1975 and 1979 and runners-up in 1983, Windies haven’t made the semi-finals of a World Cup after 1996 when they came very close to playing their fourth final. Overall, Windies have played 73 matches in the World Cup, winning 40, losing 31 while two games were without a result. 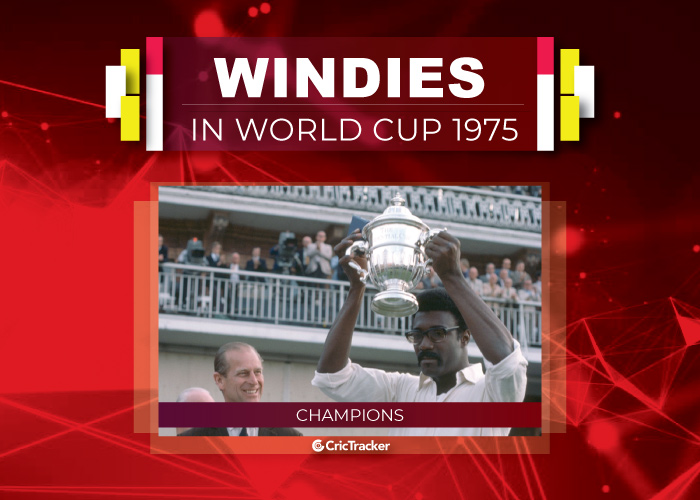 Even though there were no ICC rankings those days but the West Indies were undoubtedly the No.1 team by far. Led by Clive Lloyd, the Caribbeans started their World Cup journey against Sri Lanka at Old Trafford in the 1975 edition and won it by 9 wickets after bowling out the opponents for 87. The second match saw the West Indies snatching an incredible victory against Pakistan, winning the game by 1 wicket even after requiring 64 runs with 9 wickets down.

Andy Roberts, coming in at No.11, remained not out on 24 to take his side home along with wicket-keeper Deryck Murray. Lloyd’s men then won their third group (Group B) game against Australia by 7 wickets. The West Indies than won the semi-final against New Zealand by 5 wickets and the final against Australia by 17 runs. Lloyd slammed a century in the title clash to win the man of the match award.