Hayden Walsh Jr is the leading wicket-taker of the series with 11 scalps from four matches.

West Indies had every chance of winning the fourth T20I of their five-match series against Australia. However, Mitchell Starc held his nerves and bowled brilliantly to Andre Russell, taking the visitors to a four-run win at the Daren Sammy National Cricket Stadium on Wednesday night.

The fifth and final game of the series is set to take place on Thursday, July 16 and the Aussies will be looking for back-to-back wins. Aaron Finch and Co need a win to take the momentum into the ODIs. The hosts, on the other hand, can’t afford to drop their guard and need to be on top.

The pitch is expected to be a belter for batting and the bowlers are likely to be in for a tough time under the lights. The spinners may put a lid on the run-scoring and the pacers. Batting first should be the way forward going by the trends in the series. The weather will stay clear and an uninterrupted game can be expected.

Though the Aussies have lost the series, Mitchell Marsh has been able to show his class. He is currently the leading run-scorer of the series, having notched 189 runs at an average and strike-rate of 47.25 and 146.51 respectively. Marsh also has three half-centuries to show for his efforts. He is also more than handy with the ball in hand.

Hayden Walsh Jr has gone from strength to strength in the ongoing T20I series against Australia. In four matches, he has picked up 11 wickets at an outstanding average of 8.81. Moreover, with an economy rate of 6.06, he has been a tough nut to crack. Walsh Jr is again expected to be at his best in the final game of the five-match series. 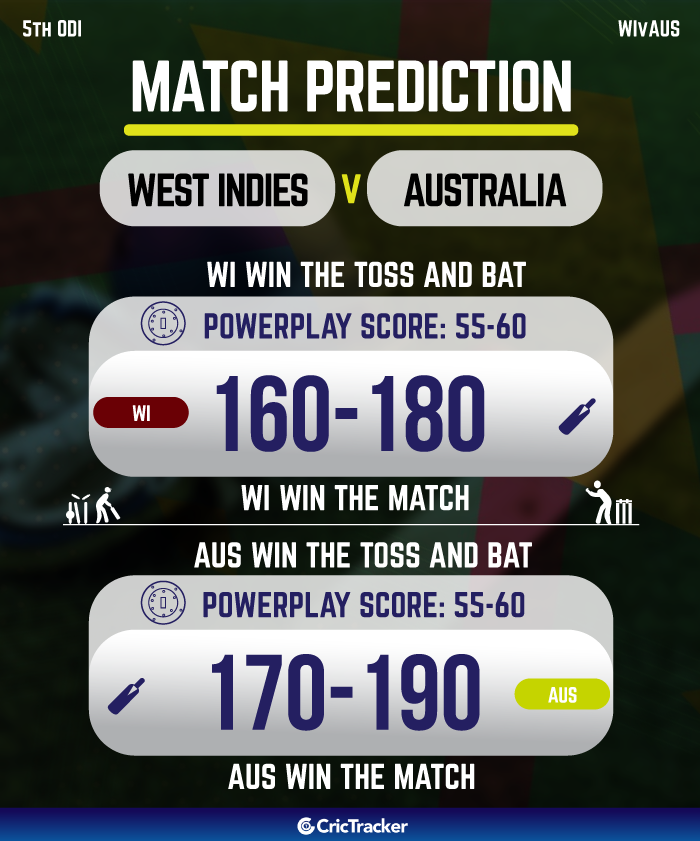