Dwayne Bravo will return to the West Indies set-up with this game.

They could be the 10th ranked team in the T20I format. However, one can never ignore the West Indies in the shortest format. They are the defending champions of the T20 World Cup and have some of the best players in their ranks. It has been quite a revelation for them under the leadership of Kieron Pollard. And now, with the return of Dwayne Bravo, the much-needed experience is back in the side.

With more senior players expected to join the side in the build-up to the T20 World Cup 2020, they already look quite fierce. Thus, this three-match T20I series against Ireland shouldn’t be a huge challenge for them. The West Indies will look to identify the right roles for different players in these three games and get the combination right. Ireland, on the other hand, has got nothing to lose and should look to play their best possible cricket.

This will be the first T20I game that will be played at the National Cricket Stadium in Grenada. The track here is a decent one for the batsmen. Fans can expect a good game of T20I cricket. The match, however, is likely to be shortened as rain is predicted and the chances of precipitation reduce as the afternoon progresses.

West Indies have only picked a 13-man squad and don’t have many selection headaches. Dwayne Bravo will be back in the eleven right away and will add great depth to the line-up. Also, the hosts must pick one player between Sherfane Rutherford and Khary Pierre. They are more likely to give a chance to the former while Hayden Walsh will hold onto his place. While Kesrick Williams will get a game, Sheldon Cottrell will operate with the new ball and at the death.

Some tough choices to make for Ireland for the first T20I. Andrew Balbirnie will take over the leadership of the side and might want to shuffle around slightly with the batting order. Also, it’d be interesting to see if the former skipper Gary Wilson will find a place in the eleven. That, however, depends on the conditions and he might have to warm the bench if the Irish decide to go with an additional bowler.

West Indies is predicted to win this game and take a 1-0 lead. 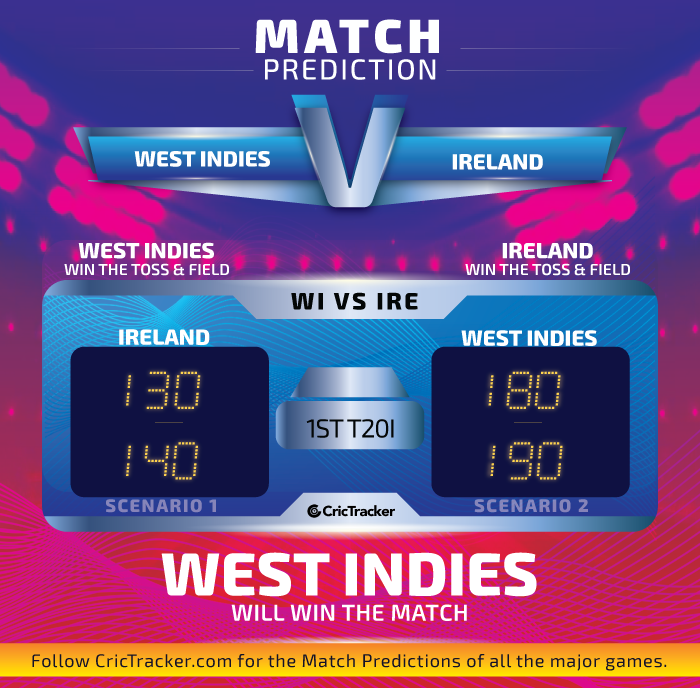