Shamarh Brooks got the Player of the Match award in the opening game of the series.

West Indies and Ireland are set to lock horns in the second game of the three-match ODI series on Tuesday, January 11 at Sabina Park, Kingston in Jamaica. The Caribbean team, led by Kieron Pollard, has made an incredible start to the series, winning the opening encounter on Saturday, January 8, by 24 runs.

After posting 269 on the board in 48.5 overs, the home team bowled Ireland out for 245 in 49.1 overs. Harry Tector scored a half-century for the visitors, but his effort went in vain. Ireland don’t have an overly great record against West Indies and they’ll need to put their best foot forward to level the series.

The pitch at the Sabina Park has generally been a sporting one to play cricket. The average score suggests that a fairly high-scoring game is on the cards. Since the hosts won the opening game after batting first, they wouldn’t want to chase.

Shamarh Brooks looked in excellent touch in the opening game of the series. Batting at No.4, the right-hander scored 93 runs off 89 balls with the help of nine fours and three sixes. He made sure that West Indies put up a decent enough score on the board.

Alzarri Joseph has a significant amount of experience at the highest level and has picked up wickets all around the world. In the first game of the series, the fast bowler picked up three wickets of Lorcan Tucker, George Dockrell and Gareth Delany. 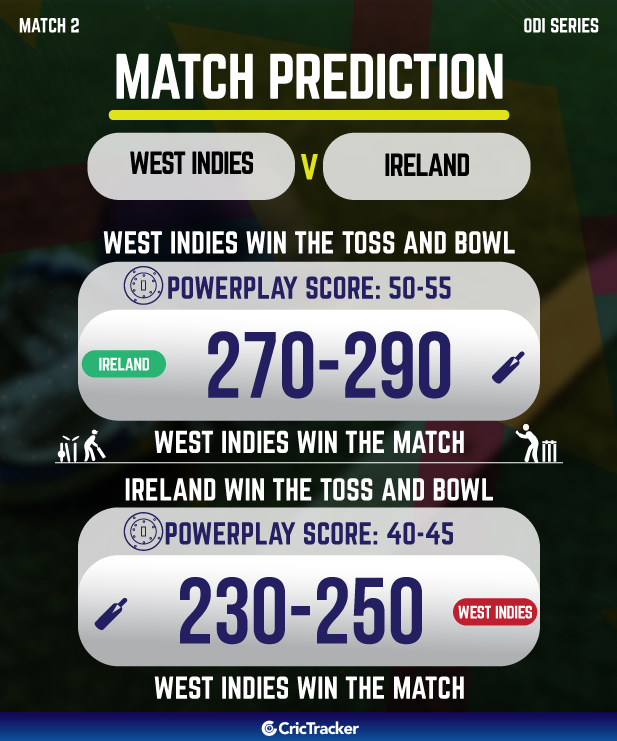