No Indian bowler comes even close to Ashwin in terms of performances in home Tests. 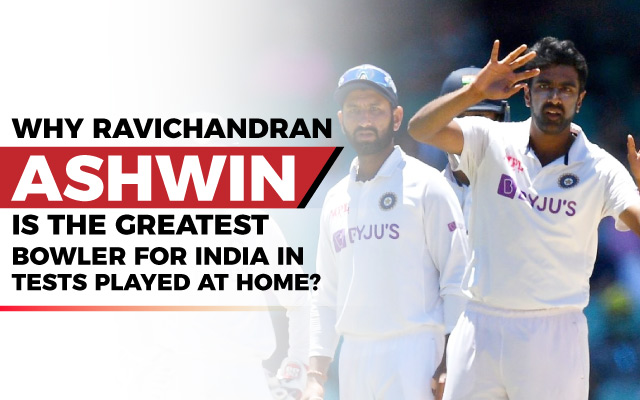 To even state that Ravichandran Ashwin will be on cloud nine at the moment will be an understatement. In what can be termed as a ‘fairytale’ Test match for him, Ashwin produced a stunning performance with both bat and ball in front of his home crowd at the MA Chidambaram stadium in Chennai against England.

The off-spinner picked up a total of 8 wickets in the match and also scored a fantabulous 106 off 148 balls with the bat in India’s second innings to allow his side to pummel England by a margin of 317 runs in the second Test. And, the local boy walked away with the ‘Man of The Match’ award as well.

Now, it has been proven beyond doubt that Ashwin is a match-winning all-rounder for his country. He has scored over 2500 (2626) runs with the bat, averages 28.24, and has scored 5 centuries in the whites. And with the ball, he is nearing 400(394) Test wickets.

Ravichandran Ashwin- A Behemoth at Home

Ravichandran Ashwin has generated some glittering numbers in Test matches played on Indian soil. In the table below, let us take a look at the 5 highest wicket-takers for India in Tests played at home. 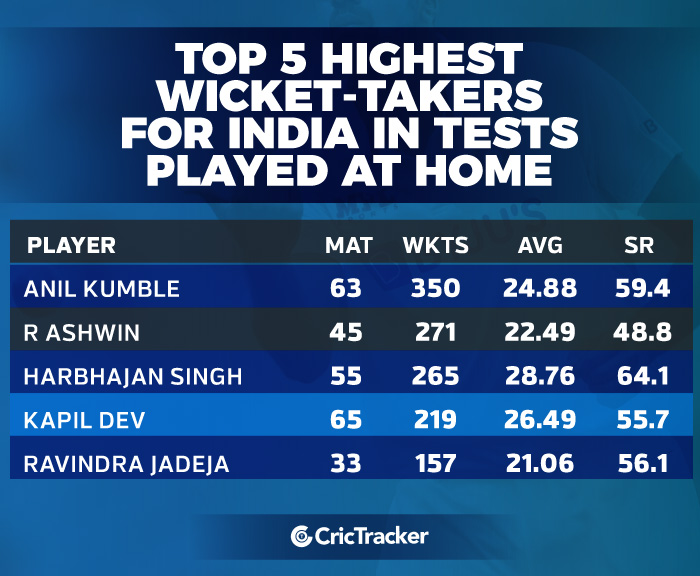 Also, Ashwin is the only bowler on the list to have a strike rate of less than 50(48.8). Kapil Dev, who has a strike rate of 55.70 comes second. Also, if Ashwin takes another 80 wickets, he will go past Kumble in the all-time leading wicket-takers list for India at home. There is no doubt that Ashwin is a behemoth at home.

Now, let us go ahead and look at the number of five-wicket hauls and 10 wicket hauls that each of these bowlers has taken at home to arrive at more conclusions. 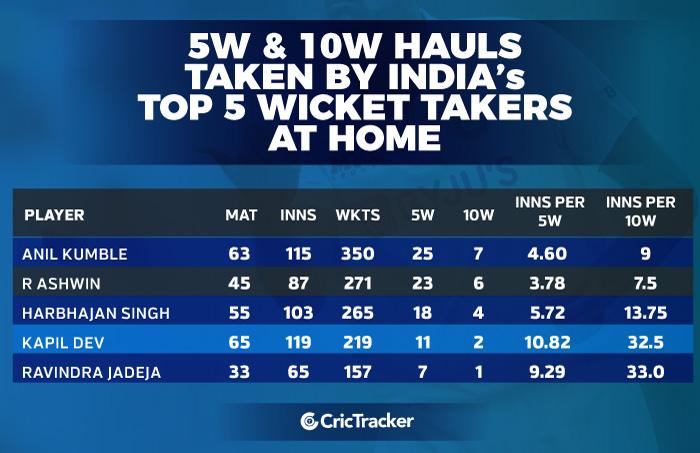 Now, let us go ahead and compare the numbers of these 5 bowlers in helping the Indian side to win or draw a Test match at home. The below table will reflect the same. 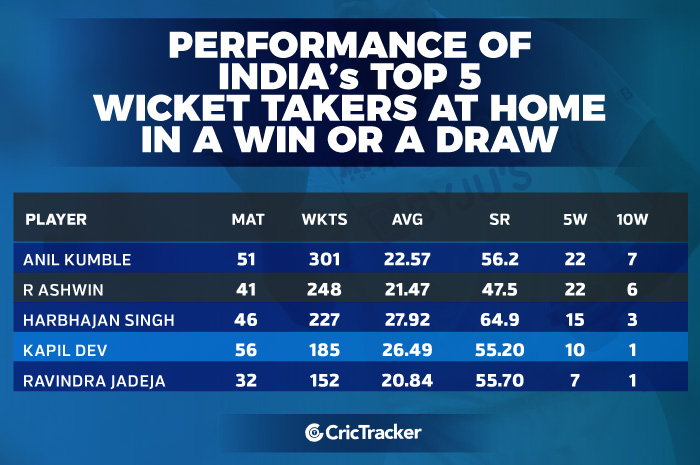 Note: The numbers for Kapil Dev also include a tied Test match as well.

Also, the Tamil Nadu spinner has taken 6 ten-wicket hauls in a win or a draw at home, just one less than Kumble in spite of playing as many as 10 matches lesser than Kumble. Another revealing fact is, Ashwin is the only bowler on the list to have a strike rate of below 50(47.5) in a win or a draw. Kapil Dev comes second, with a strike rate of 55.20.

From the above analysis, it is clear that Ashwin is the greatest bowler for India in Test matches played at home. He has emerged as a match-winner for his country with the ball, has taken wickets by the bucketful, and has left behind every other bowling great, including Anil Kumble.

Ashwin is a passionate cricketer who loves his craft. And, looking at the enthusiasm with which he approaches every Test match, it is clear that he will continue to spin a web around the opposition batsmen every time he gets the red cherry in his hand.

Note: All the stats have been taken from Cricinfo and have been updated as on 16th February 2021.