Barring Nicholas Pooran's half-century in the first match, the performance of the Caribbean batsmen have been shambolic.

Quite surprisingly, England have been decimating Windies in the ongoing T20I series. Given that they are a wonderful side in T20 cricket, the hosts were expected to perform a lot better than what they are doing now. The three-match series, which was expected to be a highly competitive one, has turned out to be completely one-sided in favour of the Eoin Morgan-led Three Lions.

England already have the series in the bag and will look to continue with the good performance in the next game. Bowling out a side like Windies for just 45 runs is a massive achievement all by itself. With the brand of cricket they’ve been playing, it is tough for the home team to make a comeback. However, they are highly unpredictable and might pull a great win off out of nowhere.

The track at the venue is a good one to bat on and definitely isn’t as bad as Windies made it look. Scores in excess of 180 are achievable and it could be a high-scoring affair. The weather prediction for the match is sunny with some periodic clouds.

Windies will continue to open the innings with Shai Hope and Chris Gayle. The middle-order has come under the fire with their performance last game. They will have to bat better and be more selective with the shots rather than trying to go bonkers after the bowlers. Both Ashley Nurse and Oshane Thomas could come back into the side.

The English top-order has fared decently well in the series. Alex Hales is due for a big knock. They bat extremely deep as even Adil Rashid at number eleven can play a few good shots. The only change they might possibly consider is replacing Joe Denly with Dawid Malan. But the left-hander usually bats at the top of the order and it is slightly tough to accommodate him.

England are expected to clean sweep the series. 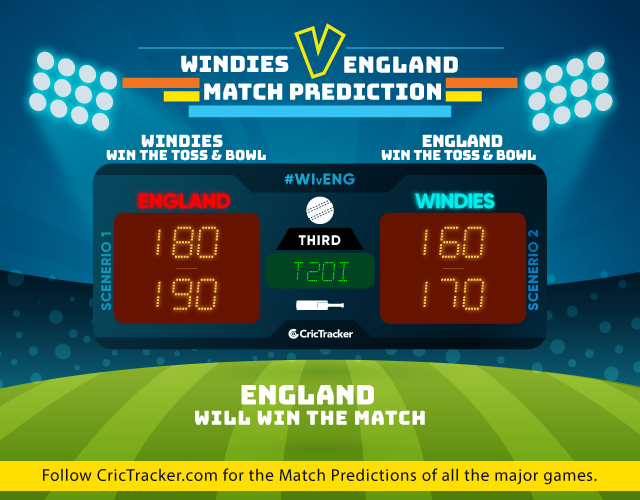