So, after the first two matches of the Women’s T20 Challenge, it boils down to the final league game after which the finalists will be decided. Trailblazers had a chance to seal their place in the final but they lost heavily to the Velocity on Wednesday and now will have to pray for the Supernovas to lose in order to go through. Their net run-rate has taken a hit and even a close win for the Supernovas is enough for the Trailblazers to get knocked out.

Velocity were clinical in their debut game under the veteran Mithali Raj’s leadership apart from the harakiri before getting over the final hurdle. Most importantly, their Indian players did extremely well and going in with only three overseas players worked wonders for the team. They are not expected to make any changes to the line-up. Supernovas, on the other hand, might also go their opponent’s way and bench Lea Tahuhu for either Mansi Joshi or Arundhati Reddy.

The 3rd game of the Women’s T20 Challenge 2019 between Supernovas and Velocity will be hosted by the Sawai Mansingh Stadium in Jaipur.

With the match set to be played in the evening again, there will be some respite for the players. The temperature will hover around 32-33 degrees Celsius and there is no rain in the forecast as well. Not much dew is expected too while the humidity will also be at the lowest.

The pitch has consistently been on the slower side in both the games. 140 seems to be the par score in Jaipur as far as the two matches are concerned and chasing might be the way to go. Supernovas almost had it in the bag chasing and both the teams might opt to field after winning the toss. 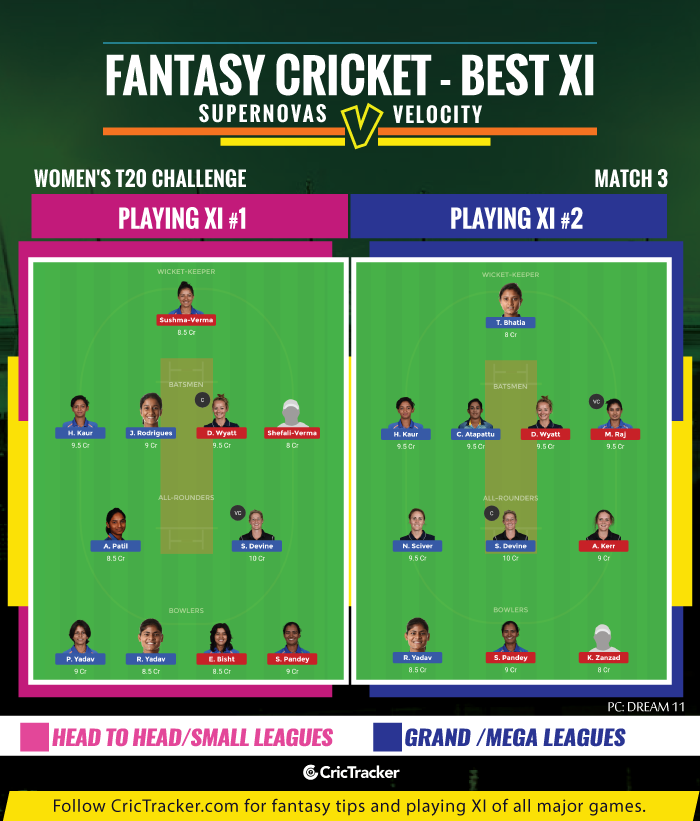 Pick as many spinners in the team as the pitch will once again be on the slower side.

With the place in the final up for grabs, Supernovas are likely to step up and win the game.