Afghanistan will begin their campaign by playing the practice matches against Pakistan and England.

Afghanistan will be playing only their second World Cup this year in England. The war-stricken nation has undergone a lot in the last few years and it is cricket which has held them together. The Afghan players have worked extremely hard in the last 15 or 20 years and it’d be a dream come true for them when their cricketers step onto the field for the game against Australia on June 1.

Afghanistan is now an ICC Test Playing Nation and has put in the hard strides to qualify for the quadrennial event last year. They will surely look to put up a good fight in this prestigious event. All their players have been working hard in the last few months as a part of their preparations for the tournament. There were several cricketers who fought hard to make it into the fifteen.

A rookie captain for such a huge tournament?

The Afghans sacked their long-serving skipper Asghar Afghan right before the tournament. This move came as quite a shocker and made some headlines. In his place, the 28-year-old Gulbadin Naib will be leading the team. The team has got two highly aggressive openers in the form of Mohammad Shahzad and Hazratullah Zazai.

Most of their players have been in good form and are quite flexible with their batting position. Spin is going to be the biggest strength for the team as they take on all the other major teams in the World Cup. The likes of Rashid Khan, Mohammad Nabi, Mujeeb Ur Rahman form an important part of the attack. Should there be even the slightest bit of assistance from the track, this troika is going to be lethal.

Afghanistan will begin their campaign by playing the practice matches against Pakistan and England. Whereas in their first encounter, they will be up against the mighty Aussies. The side has got a great chance of winning their second game against Sri Lanka, who haven’t been playing the best of cricket at the moment. Any opposition that struggles against spin will be put to a stern test when they face Afghanistan. 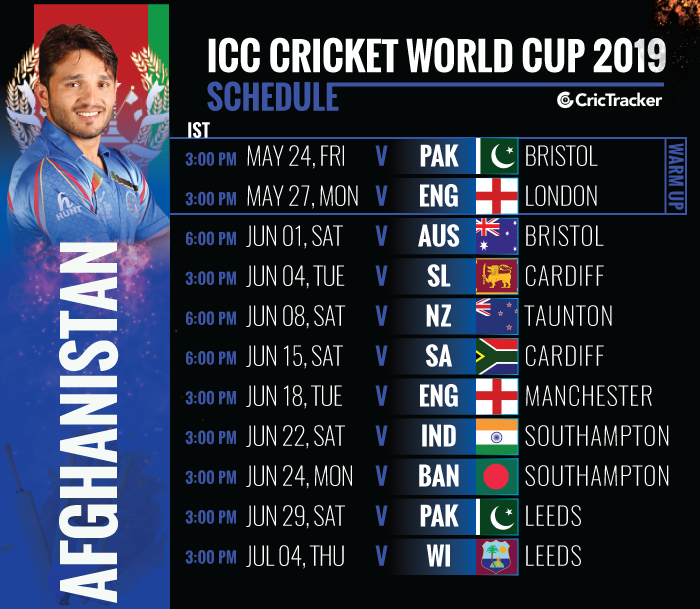