Australia, by a huge margin, is the most successful team at the World Cup.

Had you asked a few weeks ago, not many would have placed their bets on Australia. Over the last two years, the team has witnessed one of its worst phases ever. Moreover, two of their best batsmen in the form of David Warner and Steve Smith were ruled out of action for one year. Thus, the team was in all sorts of a mess and seemed to be in deep territories of trouble as they headed into the World Cup.

But, in a matter of just a few weeks, they have turned the tables upside down. Australia have played some scintillating cricket and defeated India as well as Pakistan playing away from home. Most of the players have rediscovered their form and have made the team selection extremely difficult all of a sudden. Now, as they enter the tournament, the Kangaroos start of one of the hot favourites.

Can Australia defend the title?

Australia is the most successful team ever at the World Cup. They’ve always been unstoppable in this quadrennial event and have won the trophy five times. Out of the 85 World Cup games that they played thus far, they lost only 21 and won 61. In the last six tournaments, their worst performance came when they were knocked out in the semi-finals in 2011. Furthermore, the Aussies are the defending champions and will look to keep the form going forward.

With the return of David Warner and Steve Smith, Australia would be brimming with confidence and will want to settle at nothing less than lasting the distance. Their quest begins against Afghanistan on June 1 which will be the ODI that Smith-Warner duo will play after a gap of over 16 months. But before that, the team will play two warm-up matches against England and Sri Lanka. The team’s toughest challenge in the tournament will come against the hosts and India. 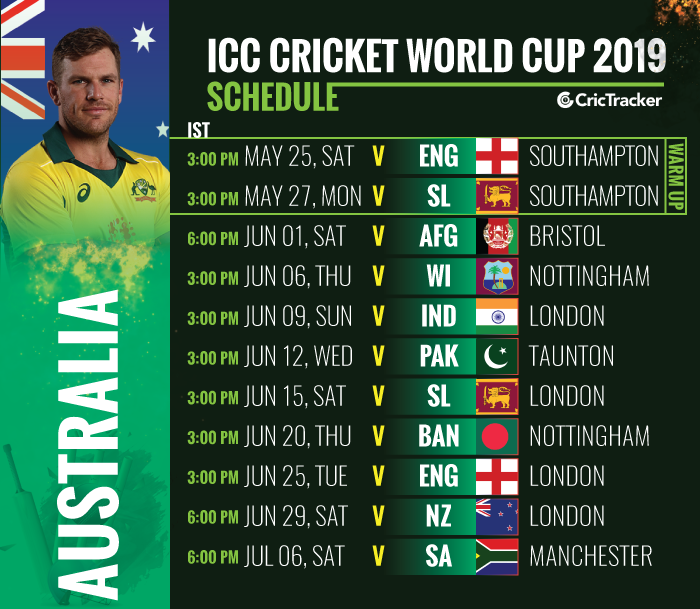