Two of the wonderful servants of South African cricket, JP Duminy and Imran Tahir, will retire from the ODI cricket after the tournament.

South Africa will be without their ace batsman AB de Villiers for the World Cup 2019. Since their readmission in 1992, the Proteas have played in seven World Cups thus far. However, it has always been the case that they have chocked out during the critical junctures of the tournament.

Out of these seven instances, they were knocked out in the group stages only once which shows how competitive a team they’ve been. They were the semi-finalists four times and quarter-finalists twice. The World Cup has always been a tournament of heartbreaks for the ‘Rainbow Nation’ and in the last edition of the tournament, they managed to get to the semi-finals but lost to New Zealand.

Will South Africa ‘choke’ once again?

Even though South Africa has got a strong squad this time as well, you can’t always back them to go the distance. However, the team would be eager to change the notion this time around. The Proteas have got an experienced skipper in the form of Faf du Plessis who is also in great form with the bat. One of the openers, Quinton de Kock, is also in the form of his life and looks unstoppable at the moment. There is some experience in the form of Hashim Amla and JP Duminy in the side.

Aiden Markram is one of the possible opening options for the side. Rassie van der Dussen has made the number three spot his own with some good performances. He’ll have an important role to play in the tournament. David Miller will be the finisher in the side while there are quality all-rounders in the form of Andile Phehlukwayo and Dwaine Pretorius. The bowling attack looks fierce and easily one of the best in the tournament.

South Africa will be playing the inaugural match of the tournament against England. They will be playing some of their most important games right at the start itself and will end the league stages with the game against Australia. The team definitely looks good enough to finish in the top four once again. 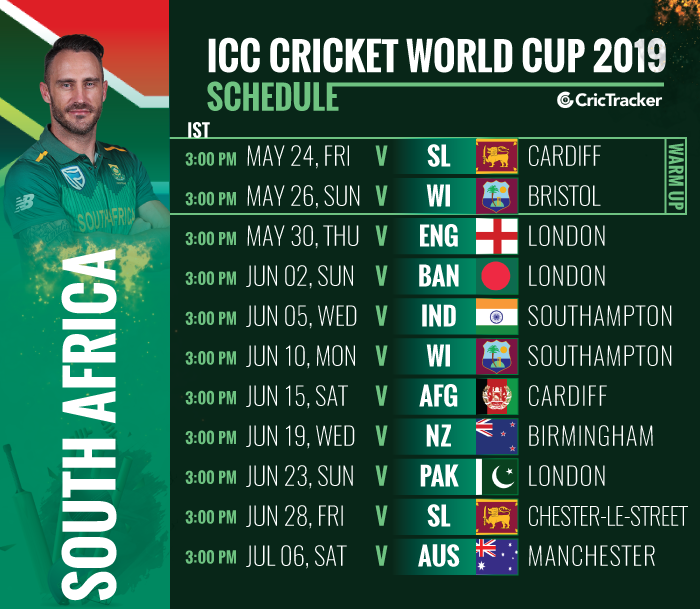