Zimbabwe vs Bangladesh, 2021 Match Prediction – Who will win today’s 2nd ODI match between ZIM vs BAN?

Timycen Maruma has injured his hamstring and may not play the next game.

Zimbabwe and Bangladesh are geared up to lock horns in the second of the three ODIs at the Harare Sports Club on Sunday, July 18. On Friday, the Tigers showed their true class, winning the first game by a mammoth margin of 155 runs.

Tamim Iqbal and Co also took a crucial 1-0 lead in the series. The hosts are now in a must-win scenario after being blown away by Shakib Al Hasan and Liton Das’s brilliance in the opener.

Timycen Maruma, moreover, injured his hamstring and may not play the next match. Going into their next encounter, the home team has to sort out their batting woes to make amends.

The pitch in Harare in Friday’s match was a sporting one. The fast bowlers and spinners had their fair share of success. Liton Das showed that run-scoring isn’t all that tough on the surface. Batting first and putting runs on the board should be the way forward for both teams. The conditions will be sunny with no chance of rain. The temperature will be around 16 degrees Celsius during match-time.

Liton Das looked in exceptional form in the opening game. He scored a magnificent century and took his team out of a precarious position. After the Tigers lost four early wickets, Das stood tall and was also involved in a 93-run stand with Mahmudullah. In his last four ODIs against Zimbabwe, Liton has scored three centuries with a top score of 176 last year in Bangladesh.

Shakib Al Hasan was a tough nut to crack for the hosts in the first game of the series. The left-arm spinner went on to pick up five wickets in his spell and broke the backbone of the Zimbabwean batting lineup. He also bowled three maidens and conceded runs at 3.10 per over. Shakib, however, hasn’t been in the best of forms with the bat in hand it’s time for him to step up at No.3. 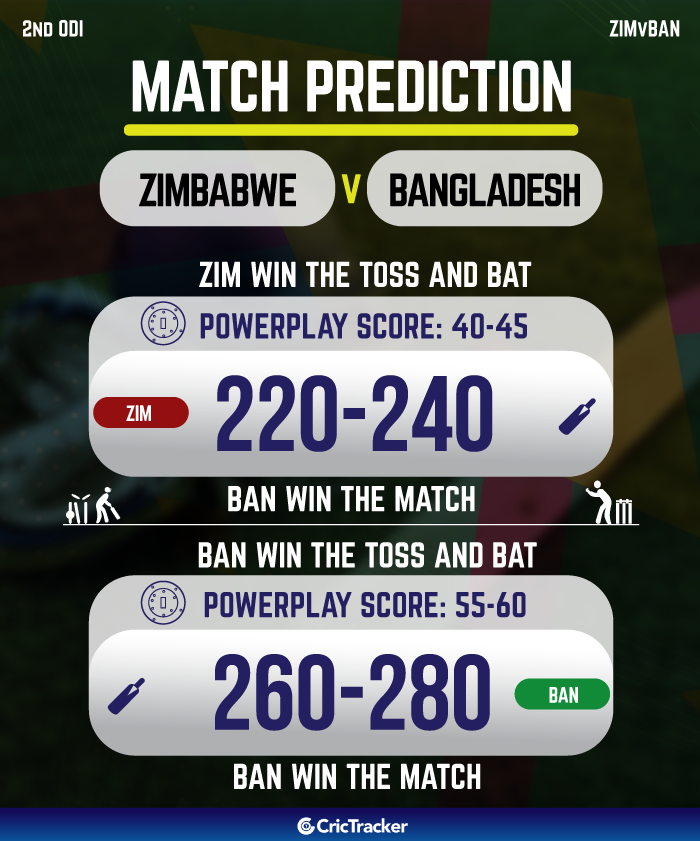