Asia Cup 2018: IND vs BAN, Final, Match Prediction - Who will win the match, India or Bangladesh?

Asia Cup 2018: IND vs BAN, Final, Match Prediction – Who will win the match, India or Bangladesh?

These are the two teams that met in the previous edition of the Asia Cup and it was indeed a close encounter.

It’s a repeat of the previous edition of the Asia Cup as India and Bangladesh comprehensively managed to reach the finals to combat for the coveted trophy. Whilst the Indian side has had a fairly routine pathway, Bangladesh had their own set of struggles but managed to see off all the adversities.

Bangladesh defeated Pakistan in a virtual semi-final on Wednesday by a convincing margin. Their bowling department did a wonderful job after Mushfiqur Rahim’s 99 helped them score 239 runs batting first. It was their first win against Pakistan and the last time they did so in an International game was in the 2016 Asia Cup.

The Indian team management rested all the senior players for the game against Afghanistan and still ended up earning a stalemate. They could’ve easily won the game if not for a few umpiring blunders, but they certainly showcased their strength as the best team in Asia right now. Another win on Friday and they will have a record 7th Asian crown in their tally.

After so many games in such a short span of time, the Dubai track seems a bit lifeless for the fast bowlers. But with the new ball, if there’s wind going around, there can be some purchase for the likes of Bhuvneshwar Kumar and Mashrafe Mortaza. Just the way it has been all throughout the tournament, spinners will dictate terms in both the innings.

They will play their main squad once again for the final. Rohit Sharma and Shikhar Dhawan will kick-start the innings with Ambati Rayudu coming in at 3. Dinesh Karthik might be coming in at number 4 followed by MS Dhoni, Kedar Jadhav, and Ravindra Jadeja.

Bhuvneshwar and Jasprit Bumrah’s ability to hit the yorker length consistently makes them lethal on any kind of surface against all oppositions. They will be the only two pacers alongside four proper spin bowling options for Rohit. Kuldeep Yadav, Ravindra Jadeja and Yuzvendra Chahal will be the main spinners with a potent weapon in Kedar Jadhav as their 6th bowling option.

Bangladesh are expected to play the same XI for this game. Liton Das and Soumya Sarkar will open the innings and although there’s concern over Mushfiqur Rahim’s fitness, he is almost certain to appear on Friday. Mominul Haque, Mohammad Mithun, Imrul Kayes and Mahmudullah will form the middle order.

Unlike India, Bangladesh will rely heavily on their fast bowlers and will go with three of them in the XI. Rubel Hossain, Mashrafe Mortaza and Mustafizur Rahim should form the seam bowling attack. Mahmudullah and Mehidy Hasan are the spin options with a decent part-time option Soumya Sarkar.

The prediction is for India to win the game and defend their Asian crown. 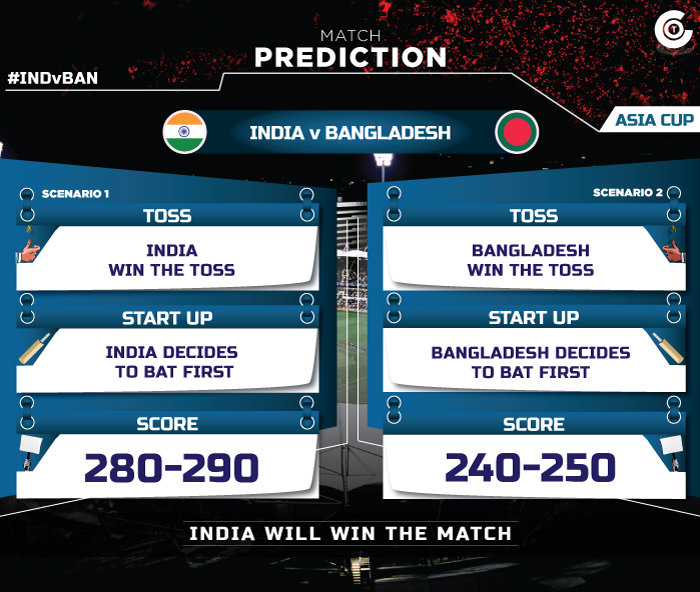