The Stars will be hoping to continue their winning run.

The Melbourne Stars will face the Sydney Thunder in the ongoing season of Big Bash League (BBL) on Saturday in the first of the doubleheader day. The Stars are currently at the sixth position in the points table and have the chance of climbing to the second spot thanks to their superior net run-rate. The Thunder, on the other hand, are sitting pretty at the top half and will have to continue a good job to stay there.

The Glenn Maxwell-led Stars are high on confidence clearly with a couple of thumping wins in the lead up to this game. After starting the season with two losses in as many games, they have blanked the teams like Sydney Sixers and the Renegades. Marcus Stoinis was the hero in the last game for them with his all-round show and the others will have to step up accordingly now.

Shane Watson and Thunder escaped with a 1-run victory against the Scorchers in the game which they already had in their pocket halfway through the second innings. The captain will love to close out the contest early if a similar case arises again. The team’s ploy to play with a lot of stars has been working wonders this season and it remains to be seen if they stick to the same plan.

This is the third game at the Carrara Oval in Queensland and the other two encounters have witnessed decent scoring opportunities. However, both the teams are playing their first game at the venue which will make the batsmen bowl first after winning the toss. The temperatures will hover around 17-20 Degrees Celsius during the course of the game.

The Stars will be missing their mystery spinner Sandeep Lamichhane as he has flown to Bangladesh to participate in the BPL which begins on Saturday. Liam Plunkett has been included in the squad as his replacement and might play in the XI straight away. Liam Bowe has also been added to the 13-man squad. Marcus Stoinis will continue to open the innings alongside Ben Dunk while Nick Larkin and Glenn Maxwell.

With Stoinis’ promotion, the Stars will need one of their top-order batsmen to play until the end as their batting is light in the middle-order. Sandeep’s absence will pave the way for Liam Plunkett while one of the Australian pacers might sit out for Liam Bowe

The Thunder have included Jay Lenton in the squad in place of Arjun Nair for this game. But they won’t be making many changes to their line-up after a thrilling victory against the Scorchers. Jos Buttler and Shane Watson have been playing superbly at the top while Callum Ferguson is in fine form. Only Joe Root needs to prove his mettle having failed to impress until now.

Daniel Sams needs to get back in form in both the departments as the spin trio of Fawad Ahmed, Jono Cook and Chris Green is threatening as ever.

The prediction is for the toss to play an important role as both the teams are playing their first match at the venue. 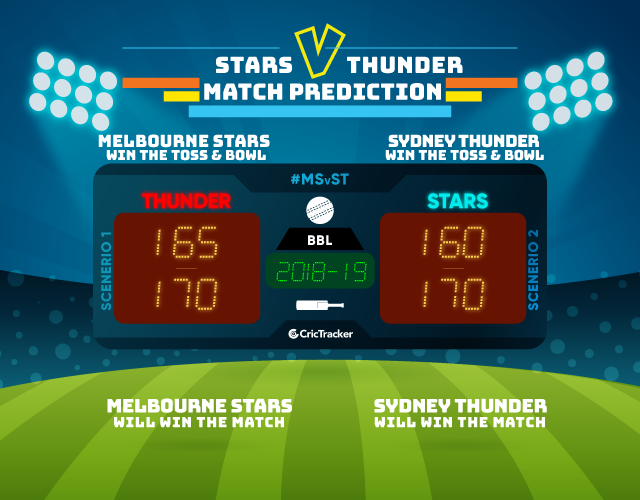