Both the teams need a win desperately.

Two teams, trying hard to claim a stake in the upper half of the points table, will take each other on in the BBL 2018-19 on Thursday. The Perth Scorchers and the Sydney Thunder haven’t had the ideal tournament thus far. While the former has won three in nine, the latter won four in ten matches. These sides are pretty much in a similar situation and a win is the need of the hour for them.

The Scorchers though, have got the psychological advantage as they lead the head to head battle 5-3. However, this isn’t a huge matter of concern for the Thunder as they managed to emerge triumphant in the last two nail-biting encounters. Both these teams have got their own positives and negatives. It all boils down to who deals with the negatives better in this even encounter.

The 41st match of the Big Bash League (BBL) 2018-19 will be played between Perth Scorchers and Sydney Thunder at the Perth Stadium.

Live streaming for this match is available on Sony LIV.

The Optus Stadium witnessed high-scoring games on the last few instances. Once settled in, the batsmen should be able to hit the ball through the line quite confidently. There will be pace and bounce on offer for the pacers. With the humidity levels getting significantly high as the night progresses, dew is expected to play a major factor. It is ideal to bowl first.

Jay Lenton has suffered a finger injury while keeping during the last match.

Sam Whiteman has a moderate grade quad injury that will require a rehabilitation period of 2-3 weeks.

David Willey returned to the UK this week to manage a left shoulder injury.

For captain and vice-captain, Cameron Bancroft, Shaun Marsh and Daniel Sams should ideally be your first preferences. Otherwise, Ashton Turner and Shane Watson also make up a good option to lead your fantasy side. If you wish to pick a bowler as your vice-captain, you can choose one between Andrew Tye and Nathan Coulter-Nile. 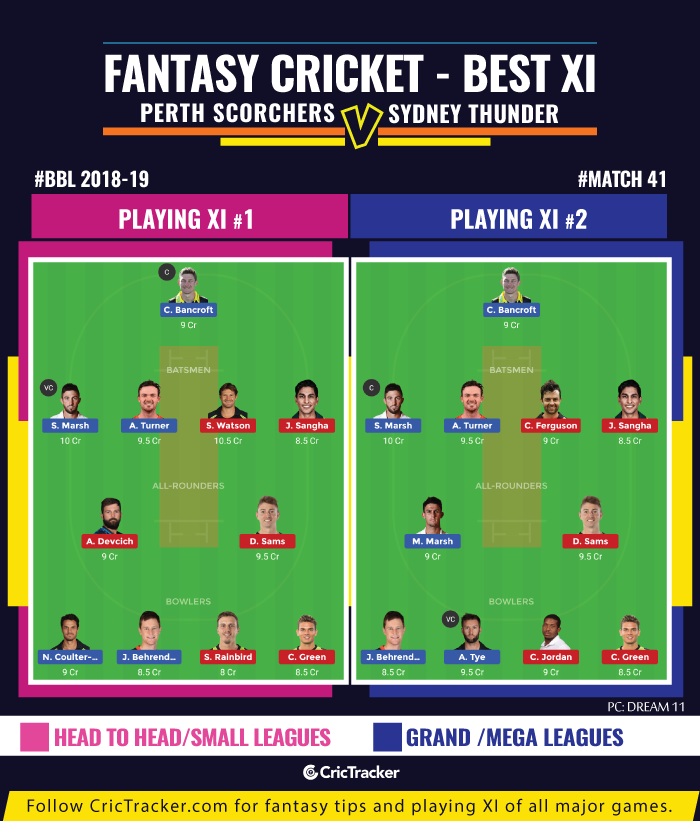 Most of the players like Bancroft, Turner, Watson, Marsh and Devcich have quite a high price tag. Hence, you might need to exclude Andrew Tye to accommodate them. But, if you want the pacer in your XI, you can possibly ignore Anton Devcich or Shane Watson.

The Perth Scorchers are expected to win the game.