Best IPL XI of the decade

Best IPL XI of the decade

It was a tough task to leave out some of the best players from this XI. But this team is as strong as it can get. 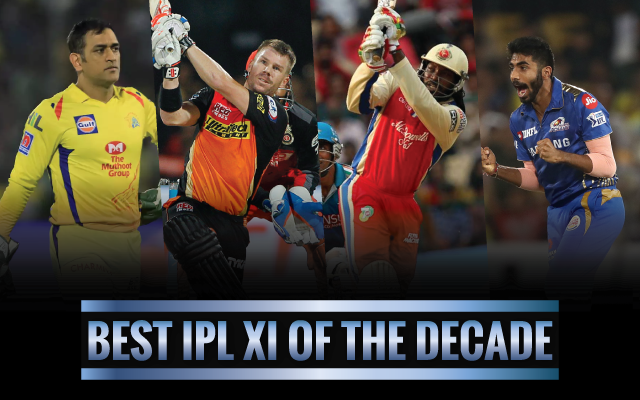 Over the years, the Indian Premier League (IPL) has only become bigger and better. It was launched in 2008 and it was a dive into the unknown. When it entered the 2010s decade, it was still finding its feet. One season was played in India and another one was shifted to South Africa due to elections in India.

However, as the decade has gone along, the IPL has stamped its authority as one of the best (if not the best) T20 leagues across the globe. In this tournament, the best not only compete against the best but also get to play and learn along with them.

Over these 10 years, players have come and gone in the IPL but there have been a few constants. They’ve consistently performed and stood up for their team and put in some match-winning performances throughout seasons. Thus, with the decade coming to an end, we look back at the best IPL XI of this decade.

David Warner has been an absolute beast in the IPL. At the start of the decade, he played for the Delhi Daredevils (now Capitals) and showed glimpses of what he can do and scored 1,272 runs from 48 games. The left-handed opener got better every season but was released by Delhi after the 2013 edition ahead of the mega auction.

In 2014, Sunrisers Hyderabad struck a jackpot and that is perhaps their best-ever buy in the history of the IPL. In the five seasons he’s turned up in SRH colours, Warner has run away with three Orange Caps as he’s topped the run charts every alternate year – 2015, 2017 and 2019.

He has aggregated at least 500 runs in each of these five seasons where he averages in excess of 40 and strikes over 140. The New South Wales opener has 36 fifty-plus scores (34 half-centuries and two hundreds) in 71 games which underlines some unreal consistency. Thus, it’s a no-brainer to have him as the top opener in the IPL XI of this decade.