Perth Scorcher sit comfy at the top spot with 10 wins from 12 games.

Adelaide Strikers will face table-toppers Perth Scorchers in the 49th league game of the Big Bash League in Adelaide.

Peter Siddle-led Strikers come into the contest after a thumping 71-run victory over Brisbane Heat, whom they wrapped for a paltry 90 courtesy a record six-for by Rashid Khan after setting 162. However, they continue to reel in the bottom half of the table, positioned sixth currently, with eight losses in 11 games.

On the other hand, the Perth Scorcher sit comfy at the top spot with 10 wins from 12 games and like Strikers, have winning momentum behind their back, coming after a 47-run victory over Melbourne Stars.

The track at the Adelaide Oval has been a balanced one thus far in the four games this season, with the average first innings score being 168. Three of those four encounters have been won by the side defending, which could be an indicator for the toss.

Kurtis Patterson is currently the second- leading run-scorer for the Scorchers with 275 runs in nine innings at an impressive 30.55 and a strike rate of nearly 144.

Rashid Khan is ruling the wicket-taking charts with 20 scalps in 11 innings at a stellar average of 13.95 and an economy rate of 6.34. He is fresh after a Player of the Match six-for in the previous encounter. 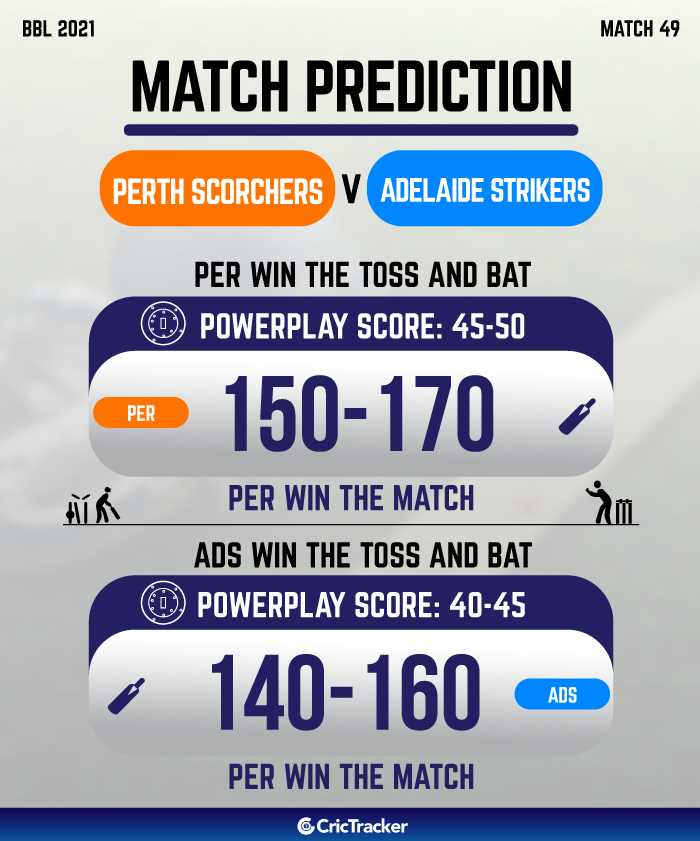