Will the Vikings be able to upset the defending champions?

The sixth edition of the Bangladesh Premier League (BPL) is all set to get underway on Saturday with a double-header. Effectively, this is the 2018 season which got delayed due to the general elections in the country. Now that everything is settled, the Bangladesh Cricket Board (BCB) will be hoping that the carnival attracts the crowd to the stadiums. The defending champions Rangpur Riders and Chittagong Vikings will lock horns in the first game of the tournament in Dhaka.

The Riders will be hoping to start the season on a winning note and with the team they’ve got, the group certainly has the ability to defend the title. The troika of AB de Villiers, Chris Gayle and Alex Hales is capable of ripping apart any bowling attack in the world and surely, the Vikings have got a tough task on their hands. The skipper Mashrafe Mortaza is also coming on a high after winning the elections and will be keen on getting back into the action.

The Vikings skipper Mushfiqur Rahim has some head-scratching to do. The team has some talented local players along with the veteran Shahid Afridi and though it looks hard, they would feel that a win against a team like Riders would bolster the confidence of the group. Moreover, Rahim is also tipped to improve the team’s performance overall after they ended at the last position in the previous edition.

Expect a belter of a pitch to start with in the BPL as it has been the norm in the previous years. A high-scoring encounter awaits the fans and one wouldn’t be surprised if the 200-run mark is breached. The weather will be cooler at the Sher-e Bangla National Stadium in Dhaka with the temperatures hovering in the mid-20s.

It is tough to predict the playing XI in the first game but as of now it looks like Chris Gayle and Hales will open the innings while the talented cricketer Mohammad Mithun will take up the gloves and is expected to bat at 3. Ravi Bopara will be the next after which the local talent follows. Farhad Reza and Nahidul Islam are decent all-rounders and are known to up the ante in the death overs.

Mashrafe Mortaza undoubtedly will lead the bowling attack for the Riders with the likes of Sohag Gazi, Shafiul and Nazmul Islam along with the pacy Oshane Thomas. There is no confirmation on AB de Villiers’ participaton yet.

Luke Ronchi will open the innings along with the ever explosive Mohammad Shahzad while the T20 specialist Cameron Delport will come in next. The skipper Rahim will look to play through the innings as Sikandar Raza will be crucial at five as well. Mohammad Ashraful marks his comeback with this game while Mosaddek Hossain is the all-rounder.

Nayeem Hasan who made an impressive Test debut against Windies will look after the spin-bowling attack while Abu Jayed, Sunzamul Islam and Khaled Ahmed are the pace bowlers.

The prediction is for the Rangpur Riders to start the tournament on a high. 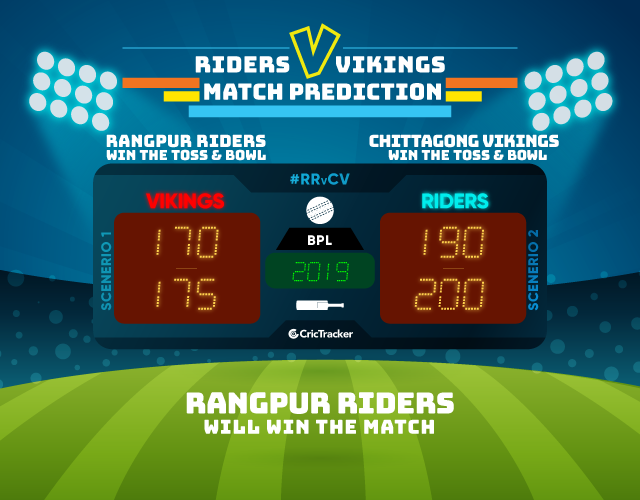