The Khulna Titans are expected to open their account by handing the Chittagong Vikings their second defeat.

Chittagong Vikings had an interesting start to the season as they defeated the defending champions Rangpur Riders in the opening game by running through the Rangpur’s batting. The Mushfiqur Rahim-captained side later went down against the Sylhet Sixers in a close match which they lost by five runs. They will be hoping to get back to winning ways against the struggling Khulna Titans. The Mahmudullah-led team has lost all the three matches they played so far.

Khulna lost to Rangpur by an eight-run margin and Dhaka Dynamites thumped them by 105 runs. Later, the Titans went on to lose to Rajshahi Kings because of another batting collapse. They will be hoping to put a much better effort against the Vikings to register their first win of the season. Skipper Mahmudullah needs to step up with the bat and see his team to first points. Pakistan left-arm pacer Junaid Khan is expected to join the team soon in place of Ali Khan.

The 11th match of the Bangladesh Premier League (BPL) 2019 will be played between Chittagong Vikings and Khulna Titans at the Sher-e-Bangla National Stadium in Mirpur, Dhaka.

The change in timings did work on Friday which witnessed the highest aggregated game of the season so far. The game will continue to start one hour late than the initial schedule and once again a high-scoring game can be expected.

Khulna Titans’ Lasith Malinga is part of Sri Lanka’s squad in the tour of New Zealand while Yasir Shah is part of Pakistan’s tour of South Africa. Junaid Khan is expected to join Khulna Titans in place of Ali Khan.

South African all-rounder Robbie Frylinck enjoyed great success in the first two matches. The Vikings’ player picked up a four-wicket haul in the first game and three wickets in the next game. Frylinck scored 12 and 44 respectively without getting dismissed in the two matches.

Robbie Frylinck will be the first preferred multiplier given his performances in the first two matches. Paul Stirling either performs with bat or ball which will make him a trustable pick as a multiplier. The likes of Junaid Siddique, Nayeem Hasan and Mahmudullah can be considered as alternatives. 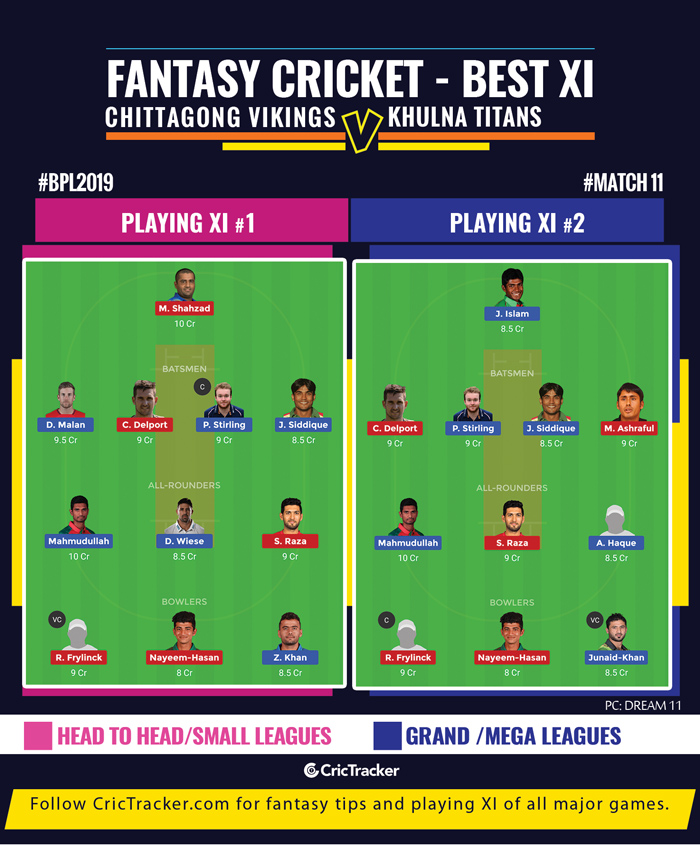 The all-rounder’s category is filled up with Sikandar Raza, David Wiese, Mahmudullah, Afif Hossain and Carlos Brathwaite. For Khulna, it is always a choice between Wiese and Brathwaite. So picking three of these five players can turn out to be tricky.

The Khulna Titans are expected to open their account by handing the Chittagong Vikings their second defeat.