The Dynamites’ batting has arguably been the best in the tournament.

After a couple of one-sided victories, Dhaka Dynamites had to strain a wee bit against Rangpur Riders. But they prevailed in the humdinger at the Sher-E-Bangla National Stadium by two wickets to stay unbeaten in this Bangladesh Premier League (BPL). Their next match is against Sylhet Sixers, led by Australian David Warner, who also won a closely-fought contest in Dhaka against Chittagong Vikings.

The Dynamites’ batting has arguably been the best in the tournament with someone or the other always stepping up and delivering. The Sixers’ bowling has tended to crumble under pressure and its task against the table-toppers isn’t expected to be easy by any stretch of the imagination. For the time being, the Shakib Al Hasan-captained Dynamites have easily looked a class apart from the other participants.

The pitches in Dhaka have gotten a tad better as the T20 extravaganza has progressed. Dhaka have won all their matches batting first and it won’t be surprising if they opt for the same again against Warner’s troops. In their last encounter even the Sixers won, bowling second. With the timings of the night games extended by almost a couple of hours, dew may play a significant part, especially in the second innings.

Hazratullah Zazai and Sunil Narine are the openers with Rony Talukdar to bat at number three. Skipper Shakib is slotted to bat at number four followed by Mizanur Rahman and Nurul Hasan Sohan. The onus would be on Pollard and Russell to play the big shots. Russell and Shakib would also need to deliver with the ball. The focus would also be on Aliss Islam, who got a hat-trick on debut against the Riders.

The left-right duo of Warner and Liton Das forms the opening pair. Nasir Hossain and Sabbir Rahman would need to shoulder responsibility in the middle order with Afif Hossain to follow. Nicholas Pooran would be keen to carry on with his rich vein of form. The bowling lineup has three speedsters in the form of Irfan, Al-Amin and Taskin. Teenager Sandeep Lamichhane is the lone specialist spin bowler.

The prediction is for Dhaka Dynamites to win their fourth match in a row. 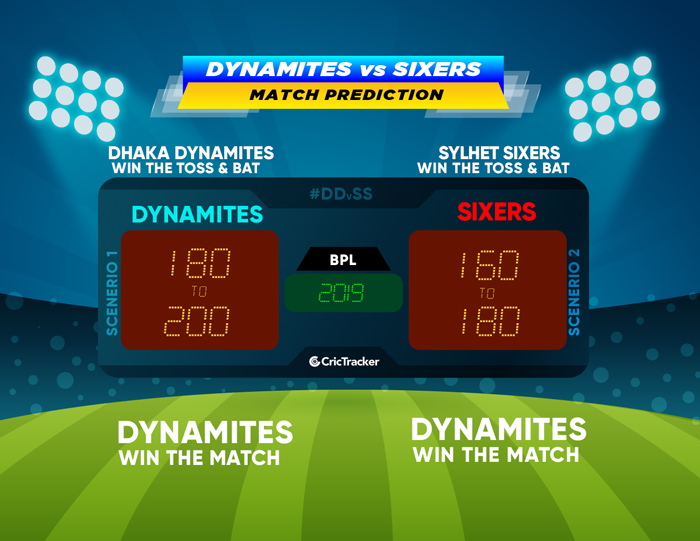