The Dynamites will be back in action within 24 hours for the 26th game of the tournament having lost to Chittagong on January 21.

The leaders of the points table in BPL 2019 – the Dhaka Dynamites will be back in action within 24 hours for the 26th game of the tournament. It’ll be the Comilla Victorians who will be the opponents this time around. The Dynamites have been one of the most oppressive teams in the league this season and aren’t easy to beat. Moreover, playing at their home ground in Dhaka further strengthens them manifold.

In such a scenario, it will be a daunting task for the Comilla Victorians to take the home team on. The Victorians too will be playing a match on the second consecutive day and desperately need a win under their belt. In the first game of this Dhaka phase of the league, they lost to the Rajshahi Kings by 38 runs and will be eager to set the records straight in the upcoming match. The side has four wins out of seven games thus far.

The 26th match of the Bangladesh Premier League (BPL) 2019 will be played between Dhaka Dynamites and Comilla Victorians at the Sher-e-Bangla National Stadium in Mirpur, Dhaka.

Even though the pitch played slow and low in the games that were played in the earlier phase, it seems to have quickened up now. The batsmen who like to hit through the line of the ball should enjoy batting on this track. For the bowlers, the one with the maximum variations are most likely to succeed as the ball tends to hold up in the track at times. With humidity increasing as the game progresses, the dew factor will come into play as well.

Evin Lewis has a hamstring injury.

Anamul Haque scored 123 runs this season at an average of 17.57. He could play a vital role for the Victorians in the upcoming match and also doubles up as a wicketkeeper. In the last two matches, he scored 26 and 40. He’ll want to make better use of a start in this game.

You could choose any two between Shakib Al Hasan, Thisara Perera and Sunil Narine as your captain and vice-captain. All these three players have had their moments in the tournament and are worthy picks. Andre Russell and Tamim Iqbal are not bad choices either. 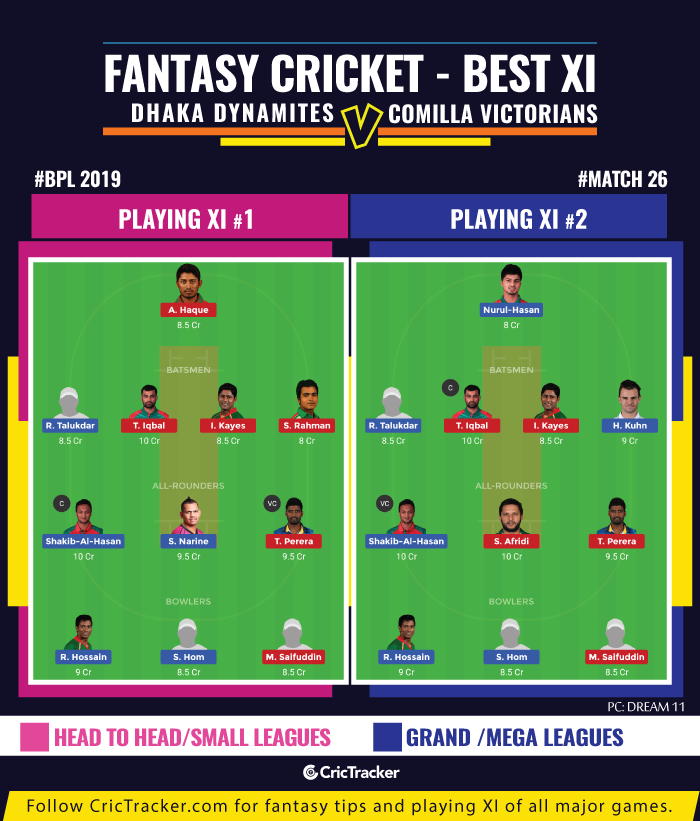 There has been a lot of chopping and changing in the playing XIs this season. Therefore, only Andre Russell and Sunil Narine are a surety to play in the overseas quota for the Dynamites. Hence, it is advisable to pick your players accordingly.

Dhaka Dynamites are expected to continue with their assassin in the tournament and win yet another match.