Stats: Rovman Powell joins a rare list with his century against Ireland

Stats: Rovman Powell joins a rare list with his century against Ireland

Rovman Powell proved his worth in the West Indies squad with a brilliant century batting down the order in the World Cup Qualifier game on Saturday. The all-rounder scored a run-a-ball 101 against Ireland to dig out his team from early troubles. This was not only the maiden ODI century for Powell but also his first in a professional game. The Jamaican all-rounder scored nine fifties in List A format including one in the ODI format before this century.

Powell, who was slated to bat at No.7, got his first chance with the bat in this tournament. He walked out to bat in the 19th over when the West Indies team were struggling at 83/5. Along with Jason Holder, Powell put on an 86-run stand for the 6th wicket. He brought up his fifty off 77 balls in the 44th over of the team’s innings. After Carlos Brathwaite’s unfortunate runout, Powell cut loose in the death overs. He hit his 6th six over long-on in the 49th over to move into the 90s. He followed it with another lusty blow on the very next delivery to complete his hundred off 98 balls.

As many as six ODI hundreds were scored by five players for West Indies in ODI cricket at No.6 position. Lendl Simmons’ 102 was the last of the six which came in the previous WI-Ireland ODI meeting in the CWC 2015. In the same game, Darren Sammy scored 89 at No.7 which was the previous joint highest score for a West Indies player while batting at No.7 in ODI cricket. Andre Russell scored an unbeaten 92 in 2011 against India which is the 2nd highest score for a No.8 and lower batsman in ODI cricket behind Chris Woakes’ 95* in 2016 against Sri Lanka.

Centuries while batting at No.7 in the ODI cricket: 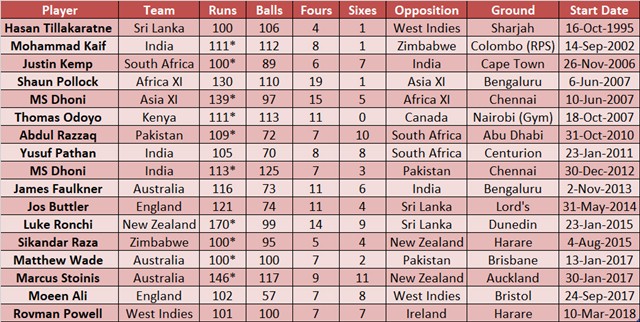