Can the Stars be able to notch up yet another win?

The Caribbean Premier League (CPL) is going deep with every passing game and the teams are looking to notch up victories in any which way possible. The match 17 of the season will see the St Lucia Stars squaring off against the Jamaica Tallawahs at the Darren Sammy National Cricket Stadium. The hosts are on a high after a scintillating victory over Guyana and they will be looking to end their home games with yet another victory. Moreover, the Stars are in a must-win situation already and a loss could possibly end their season.

Kieron Pollard, the skipper of the Stars, would be hoping that his team puts up a similar kind of show against the Tallawahs. The visitors, on the other hand, have lost their way after a hat-trick of victories. But they are now on the brink after giving away the same number of matches consecutively. The team would be desperately looking to come out of the rut and what better than facing the inconsistent side of the competition so far.

It is the last game in St Lucia and if the pitch for Friday’s game is any indication, it could be another low-scoring game. The bowlers will have their say unless the batters from both the teams look to apply themselves with some patience. The team winning the toss will definitely look to bowl first and make it tough for the opposition to put up a decent total.

Wins are very rare for the Stars and now that they have finally won their second game as well, there is no need to change the combination. The move to bat David Warner in the middle-order worked briefly and they might continue with it. One can never rule out Lendl Simmons out and he can win the game on his day. Andre Fletcher showed he can play the waiting game as well and his form will be crucial. With the bowling attack looking good, the Stars will feel confident of notching up one more win.

Jamaica Tallawahs, somehow, will have to find the right combination soon before things get out of their control. There might be one change in the line-up and Andre McCarthy might come in for Kennar Lewis. McCarthy was one of the top players last season and it is baffling to see him on the bench this year. Andre Russell has also gone quite after playing a solitary scintillating inning to get off the mark in the competition.

Even in this game, the toss will play a crucial part and it will be tough defending the total. 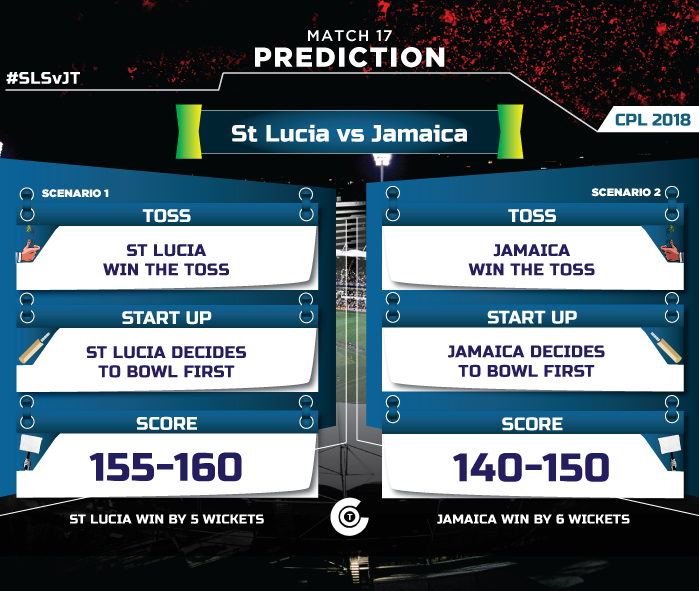