Gayle's men also have an opportunity to dethrone the Tallawahs from the top of the league table.

Jamaica Tallawahs have got off to a stupendous start in this edition’s Caribbean Premier League (CPL) having won against Trinbago Knight Riders and St Lucia Stars in their homeground at Sabina Park in Jamaica. More importantly, they are sitting pretty atop the points table. Andre Russell’s men will now face the Chris Gayle-captained St Kitts and Nevis Patriots at the same venue.

The visiting team, on the contrary, stormed back against the Knights after their lacklustre performance against Guyana Amazon Warriors. Their batters found form in the last match and have the chance to cash in on the Tallawahs’ bowling which has been a tad out of sorts. Meanwhile, Gayle’s men also have an opportunity to dethrone the Tallawahs from the top of the league table.

The pitch has thus far been a batsman’s paradise and teams have been more comfortable chasing on the wicket. On two occasions, Russell and Co have shown that big targets can be chased down with wickets in hand. Teams are most likely to field first after winning the toss. However, against a strong Patriots’ attack, the Tallawahs may not find it easy if they bat second next time around.

The Tallawahs are likely to remain unchanged. They roped in Oshane Thomas for Kemar Roach in the last match and the move worked as the seamer picked up three crucial wickets. The batting order put up a combined effort and would be hoping to replicate their show even in the next match. The other bowlers including Russell, Wasim, Zampa, and Santokie have also been accurate.

The visitors also won’t want to tinker with their winning combination. Carlos Brathwaite came at number eight and played a whirlwind knock and the same manifests the depth in their batting lineup. He also was effective with the leather. Sandeep Lamichhane has been stupendous and his role will be crucial, to say the least. The onus will also be on the openers in Gayle and Lewis.

The prediction is St Kitts and Nevis Patriots to win the match. 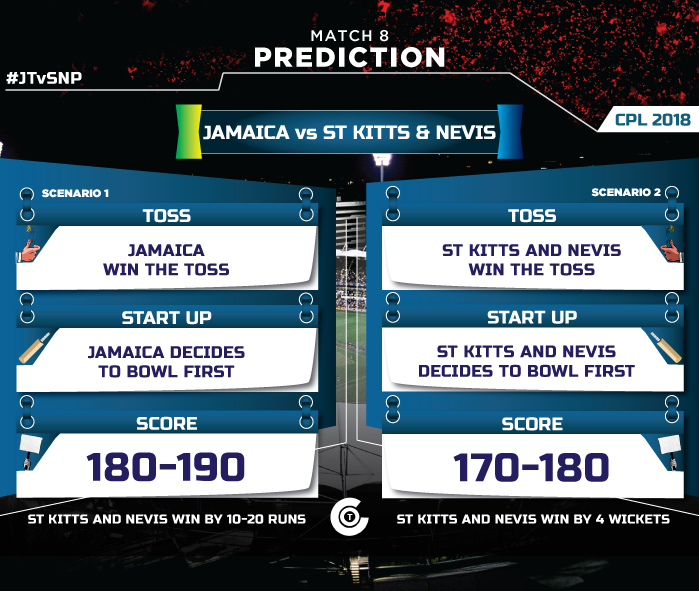