in the league stage, the Kings beat the Patriots both times.

Saint Lucia Kings vs St Kitts and St Kitts and Nevis Patriots are set to lock horns in the Final of the CPL 2021 on Wednesday, September 15 at the Warner Park in St Kitts. The Patriots have well and truly found their mojo after losing four out of their last five games in the league stage of the tournament.

In the semi-final, they brushed aside the Guyana Amazon Warriors after Evin Lewis scored a half-century. The Kings, on the other hand, must be brimming with confidence after beating defending champions Trinbago Knight Riders by 21 runs on Tuesday. They are looking in good form in the event.

The pitch at Warner Park has become good for batting in the second half of the tournament. However, in the morning games, the team, batting second, has continued to struggle. Batting first should be the way forward for teams.

Evin Lewis has been outstanding with the bat for the Patriots in the tournament. In fact, he is their leading run-scorer, having notched 420 runs at an average of 52.50 and a strike rate of 164.70. In the Patriots’ penultimate league game, he scored a 52-ball 102 against the Knight Riders. Thereafter, he followed up the knock with a 39-ball 77 against the Warriors in the semis.

Dominic Drakes has bowled exceptionally for the Patriots in the ongoing edition of the T20 league. In 10 games, the left-arm fast bowler has picked up 15 wickets. Although his economy rate is above eight, he has delivered the goods for his team. Not to forget that Drakes can do serious damage with the bat in hand lower down the lineup. 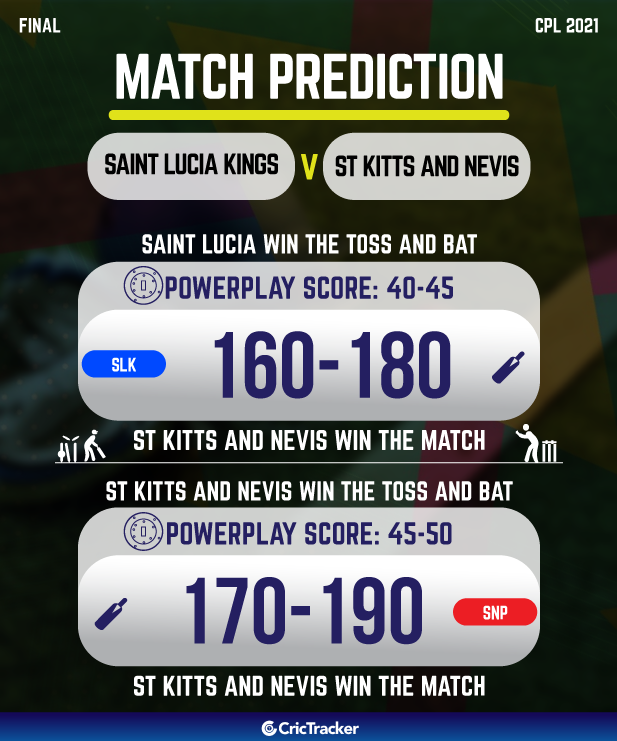