India's T20 World Cup 2022 campaign ended with a disappointing defeat against England in the second semi-final clash on Thursday (November 10). Indian team dominated the Super 12 Group 2 table with the highest eight points and were favorites to reach the final. But India's recent struggles in the knock-out games continued with poor performance in the semi-final clash as India suffered a big 10-wicket defeat while defending a big 169-run target.

But in some positives for Indian fans, Virat Kohli dominated the tournament with four half-centuries from just six innings and remains at the top of scoring chart with 296 runs. He broke and created many records from his first innings, 82* against Pakistan to win the thriller in the last over. During that knock, he surpassed Rohit Sharma to became the leading run-scorer in T20I cricket.

The 34-year-old former Indian captain also broke Mahela Jayawardene's 1016-run record for the most runs in T20 World Cup history. Kohli also became the first player in the world to score 4000 runs in T20I cricket during his 50* knock against England in the semi-final clash. But there are some rare and unknown records he created during his last innings in the tournament, so, let's take a look at those records.

1. Virat Kohli reached his 200th 50-plus score across formats 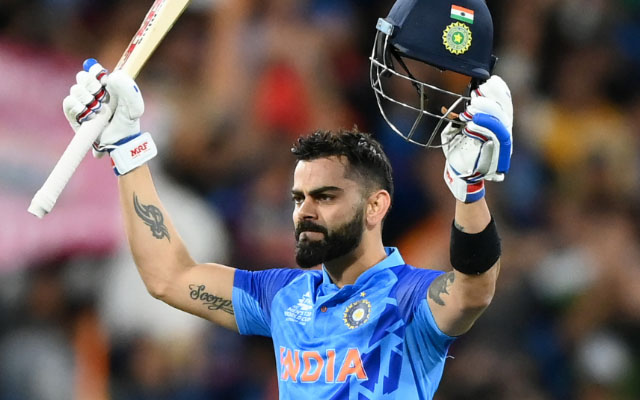 Kohli started the tournament with a big 82* knock against Pakistan and added two more fifty-plus knocks against Netherlands and Bangladesh, while remaining unbeaten in all. Kohli scored only 26 runs against Zimbabwe in the last Super 12 group-stage match but scored another fifty against England in the semi-final round.

This was Virat Kohli's 200th 50-plus score across formats and he became the only second Indian batter to achieve this big milestone. He is now only 64 50-plus scores behind the former Indian great Sachin Tendulkar and considering his recent form, he is likely to surpass this record as well.