The last time Comilla Victorians and Dhaka Dominators locked horns, the former side won the game by 33 runs.

Comilla Victorians (COV) will face Dhaka Dominators (DD) in the 22nd match of the Bangladesh Premier League 2023, at the Shere Bangla National Stadium on Monday.  Comilla Victorians are in red-hot form, having won their last three games. COV stood victorious the last time they clashed against Dominators and Imrul Kayes & co. would again look to bring their A-game into play in Dhaka.

Dhaka Dominators started their campaign with a win over Khulna Tigers but since then, they have succumbed to five consecutive defeats and currently languishing at the bottom of the table. Dominators will like to get their act together in the game against Comilla and register their second win of the season.

Shere Bangla National Stadium has offered a good batting wicket. However, the track is not placid in totality and it has somenthing for both the  pacers and spinners have alike. Interestingly, as per past results, chasing teams have thrived at the venue and six out of eight times, the side batting second has stood tall. Thus, the team winning the toss might be inclined towards fielding first.

Litton Das has taken the attack to the opposition right from the get-go and provided Victorians with brisk starts. He has featured in six matches and hammered 160 runs at a superb strike rate of 148.14. The 28-year-old would be itching to display his batting might in the clash against Dominators.

Tanvir Islam has been Comilla’s wrecker-in-chief in the ongoing edition of BPL. The 26-year-old has spun the web around the opposition and bagged eight wickets in four games that too at an impeccable economy of 5.75. When COV take the stage alongside DD, he would look to weave his magic and lead the way with the ball. 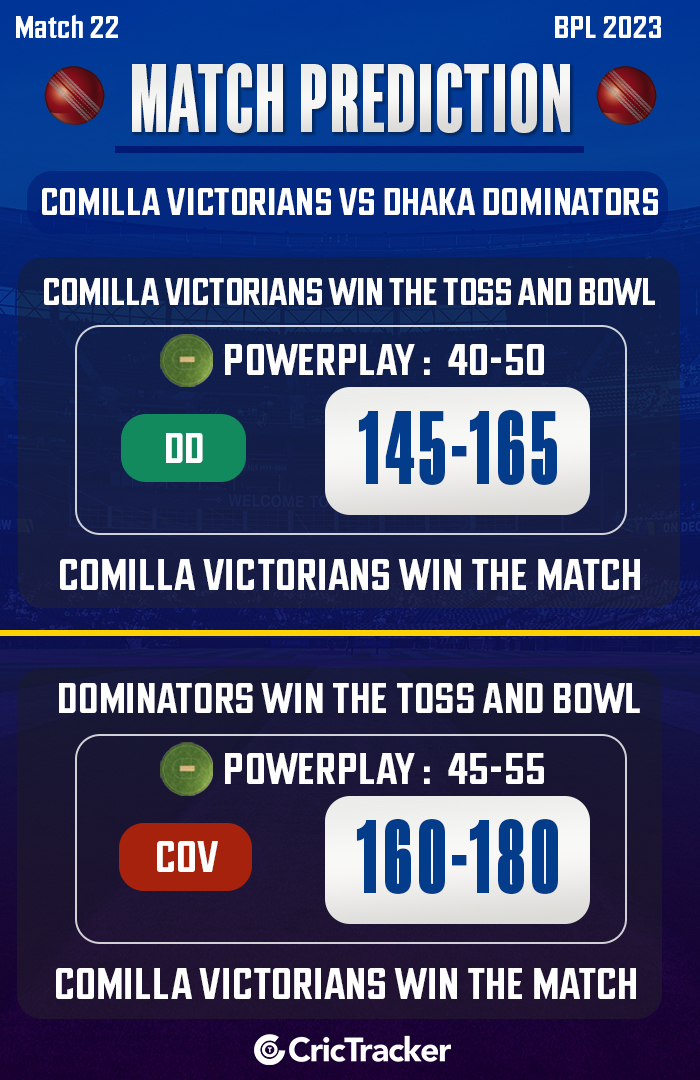