New Zealand is leading the series by 1-0.

New Zealand took an early lead in the series by winning the first game. The game witnessed a lot of ups and downs the contest was reduced to 35-overs-a-side due to the wet outfield, and then the bad light stopped the play just a few overs before the end, leading to New Zealand winning by DLS method.

West Indies would hope for their home turf to be supportive of them this time as they aim to level the series by winning the second fixture. On the other hand, the White Ferns need just one win to clinch the series and bag the important ICC Championship points. Both teams put up a fighting effort in the first game and would look to keep that going.

The Sir Vivian Richards Stadium's wicket is likely to make both batters and bowlers play an equally competitive contest. The captain who wins the toss may decide to bowl first and then chase the total. There are chances of the game being interrupted, just like the first fixture.

New Zealand opener Suzie Bates has been in great touch in the white-ball format, and she continued her good form in the opening game by hitting a half-century. The senior pro is capable of providing the side with the desired start, and New Zealand would look up to her doing that, again.

The West Indies skipper worked her charm with the spin, and gave the New Zealand batters a difficult time out on the field in the previous game. She has been very economical with the ball, and also managed to pick up three crucial wickets in the first contest. She would surely aim for the same given the experience of the turf from the first game. 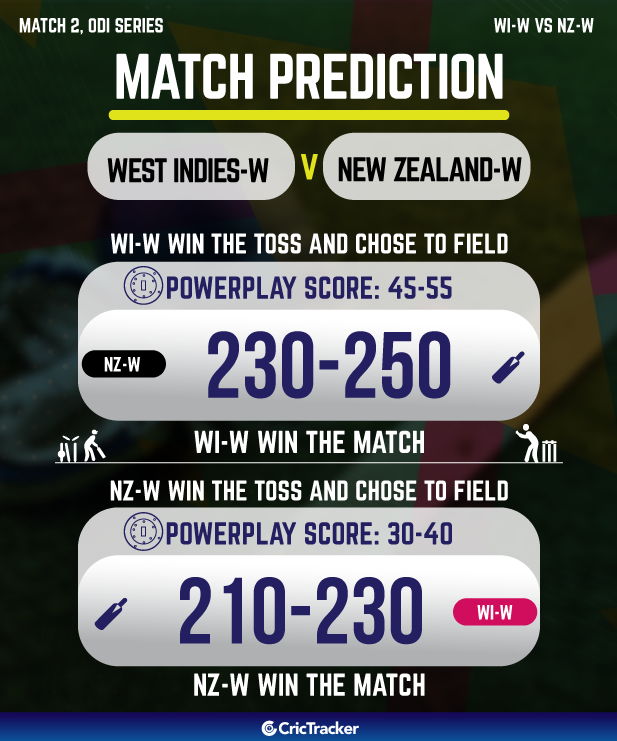