CricTracker Exclusive: India and Australia will be tough teams to beat in the T20 World Cup: Lance Klusener

He also opened up about the talent pool in Afghanistan while also praising Rashid Khan and Mohammad Nabi for their contribution. 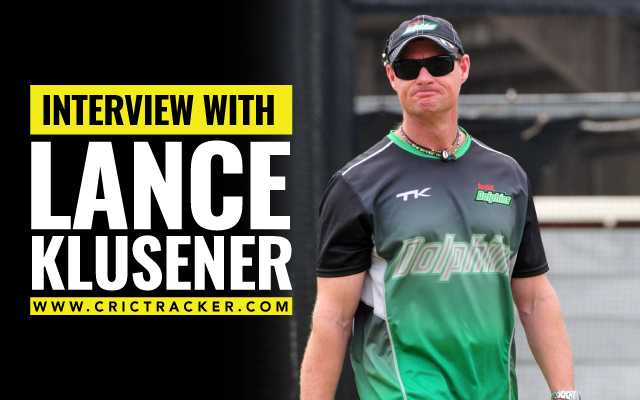 But exactly two decades ago, there was a cricketer who would try to clear the ropes on almost every ball he faced, while also ensuring that those who faced his balls were either hit on the stumps or the helmet. That was the kind of aggression we saw from Lance Klusener in the World Cup of ’99 – a heartbreak that South Africa still hasn’t quite got over.

The cricketer-turned-coach, who is currently at the helm of Afghanistan Cricket Team’s support staff, is known for his social awkwardness towards the media. However, recently he spoke to CricTracker and opened up about the talent pool in Afghanistan while also praising Rashid Khan and Mohammad Nabi. He also gave his views about the upcoming T20 World Cup in Australia.

Here are a few excerpts:

Q – Must be very inspiring to coach the Afghanistan team? They’ve come a long way from being a turbulent country.

A – I never as such had an inspirational story in my life. It is mainly my parents who motivated me to play the game and then later the late Bob Woolmer had played a big part in my cricket life. Obviously, I was fortunate enough to see some legends of South African cricket very closely and learned a lot from them but it’s my parents always who motivated me to enjoy what I enjoy the most.

Q – Any plans of promoting Rashid Khan as an opener in the World T20?

A – We have certain plans on what we are working now to take the team up. Obviously, Rashid is a world-class performer and a true motivator for all of us but as I said we are working on certain plans to make sure we all together take the team forward as there is no doubt that Afghanistan plays the most exciting brand of cricket in T20 and we want to make winning a habit to make our brand more valuable.

Q – How difficult will it be to replace Mohammad Nabi once he quits from all formats of the game?

Filling the slot of Nabi is a huge thing especially, the experience he brings in to the team. Obviously we are still having him in white-ball cricket but it’s a huge task for us even to get a possible replacement for Nabi. We just finished our camp today at Dubai and we are working on certain plans to the best interest of the team in red-ball cricket and hopefully, it works out for us.

Q – Any particular Afghanistan players on whom you have your hopes high for the World T20?

A – We’ve got some serious talent in T20 cricket. If you see at any major T20 league then you will see the number of our boys playing there. Obviously, Rashid, Mujeeb and Nabi have shown the cricket world what they’re capable of but if we have to be successful then we need to play as a team with each member contributing and doing their roles. Rashid and Nabi will have a huge part to play but we definitely need to play as a team to get success as cricket is a team game and not individual sports.

Q – Any fond memory with any Indian cricketer from your playing days?

A – I am really good with almost all the Indian players of my era and I even played county cricket with former Indian captain and current BCCI president for two years. So I am very good with all of them like Sachin, Sourav, Dravid and Kumble for example. Obviously, during the ’99 World Cup, I had a lot of praise from all the Indian players which I admire and respect. I always have had a very special place in my heart for India as my Test debut came in India. Also, I coached in India a lot in IPL and for Delhi and to complete the circle my manager is also from India.

Q – Two teams that you think will be difficult to beat in the World T20?

A – World Cup is a big and a pressure event so both mentally and physically you need to be very strong. Obviously it is still over 10 months to go but if you see from the current form then obviously this Indian team looks a complete team and as the tournament is in Australia so the hosts will also be a tough side. Both these teams, as of now, looking difficult to beat. Also, please don’t rule Afghanistan out as on our day we can beat any side in T20 cricket as we are really good at this format.