The Chennai Super Kings are one of the three teams the Rajasthan Royals defeated in this season. 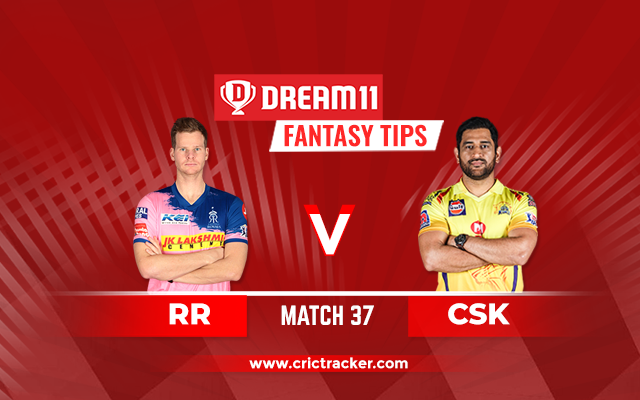 The 37th match of the Indian Premier League (IPL) 2020 will be played between Chennai Super Kings and Rajasthan Royals at the Sheikh Zayed Stadium in Abu Dhabi.

In a tournament like the IPL, it doesn’t take much to slip away in the sand. Over the course of 14 games, teams have got to be as consistent as possible to ensure a spot in the top four. However, that hasn’t been the case for the Chennai Super Kings (CSK) and Rajasthan Royals (RR) unfortunately. At this point in the tournament, both the teams are struggling with only three wins in nine games.

With five more games left for them, they have got to turn things around quickly. In their respective last games, both these sides have got themselves to blame for the losses. While Jaydev Unadkat threw it away by conceding 25 in the penultimate over against the Royal Challengers Bangalore (RCB), Ravindra Jadeja failed to defend 17 runs off the final over against Delhi Capitals (DC). It is a wonderful opportunity for both these teams to bounce back and stay alive in the tournament.

The temperature will be around 32 degrees Celsius at the start of the game and will fall to around 30 degrees as the evening progresses.

The pitch at Abu Dhabi is a sporting one. Batsmen can score comfortably against the new ball. Pacers have picked more wickets at this venue while the spinners have managed to be more economical.

Dwayne Bravo was injured during the last game and didn’t bowl the final over. He is uncertain for this match.

Faf du Plessis is the highest run-scorer for CSK this season with 365 runs in 9 games at an average of 52.

Steve Smith played a fine knock for his team against RCB and mustered 57 off 36 balls.

Robin Uthappa opened the innings in the last match and impressed everyone right away with a 22-ball 41.

Jofra Archer went wicketless in the last game but has accounted for 12 wickets thus far in the season.

Shane Watson has been going well with the bat this year and scored 277 runs in 9 games at an average of 35.

Ambati Rayudu looked to be in great touch in the last game and raced his way to 45 off 25 balls. He scored 237 runs in 6 innings this season.

Ben Stokes hasn’t yet fired with the bat this season and has been expensive with the ball too. He’s playing after a long time and seems to be still rusty. However, he could get going in the upcoming match.

Chennai Super Kings are expected to win this match.