England vs Australia 2020, 1st ODI: Cricket Match Prediction: Who will win the match?

England vs Australia 2020, 1st ODI: Cricket Match Prediction: Who will win the match?

The last time these two teams met in a 50-over clash was the semi-final of the World Cup of 2019 when England routed Australia quite convincingly.

After the culmination of the T20I series, it is time for England and Australia to meet in the 50-over format. All the games of the three-match series will be played at the Old Trafford in Manchester in a bio-secured bubble. The home team is coming into the series with a victory in the recently concluded T20I series, however, this one is going to be a different ball-game.

The last time these two teams met in a 50-over clash was the semi-final of the 2019 World Cup when England routed Australia quite convincingly. But that, of course, was an end of a cycle, whereas this almost marks the commencement of the other. More so after the ODI World Cup Super League has added a good bit of context and relevance to almost each of the limited-overs games, bringing all dead rubbers to an end.

Australia resumed playing after an unusually long break of five months and did quite well to not be whitewashed when the threat looked imminent. Had they been able to capitalise on the correct times, who knows, the score-line might have even read in their favor! Having said that, England were bang on target too. If anything, those three games have only attuned Australia to the seething intensity of international cricket.

Australia have been a brilliant bunch in the shortest version of the game and a victory in the third and last game at Southampton also secured their crown in the ICC rankings. However, the plot twists quite vehemently in the ODI format. Their run in the 50-overs game has been far from decent and they have been able to win only two of the nine series in the last three years.

After they met England in the WC encounter, Australia have lost five of the seven games they have played, including a 0-3 whitewash against South Africa earlier this year. It should, therefore, not be surprising to see Aaron Finch making a remark about his team’s consistency. “Leading into this one-day series we’re just looking to be as consistent as possible, we know that our world ranking reflects the inconsistency we’ve had in the one day format…”, the Australian skipper stated in the pre-series interaction with the media.

On the other hand, England have played six ODIs all in all after the fateful WC final against New Zealand last year, and have drawn a series 1-1 against South Africa and defeated Ireland 2-1 recently. The series is worth 30 points of the ODI Super League and two quality sides are on a clash. Things might not look ideal for Australia, however, they can never be written off.

The track at Manchester is renowned for its bounce and the assistance that the pacers get off the wicket. However, the English skipper believes the track will be on the slower side and assistive for the spinners on Friday. One can expect a moderate scoring match given that factor. Conditions are going to be slightly overcast but there is not a threat of rain.

Though Ben Stokes is unavailable for the entire series due to his family reasons, all three of Jos Buttler, Jason Roy, and Joe Root are back in the team. Roy, who was ruled out due to a side strain, is declared completely fit for the series, and with Eoin Morgan’s awkward finger-dislocation healed completely, he is available for selection too.

Given that the track is expected to help spinners, Moeen Ali and Adil Rashid should pick themselves, whereas, in Stokes’ absence, Sam Billings should occupy the No. six spot. The pacers in Jofra Archer and Mark Wood will both be available whereas and one amongst Chris Jordan and Chris Woakes (preferably latter) should be the other member of the three-pronged attack.

The presence of Marnus Labuschagne is a positive addition in Australia’s playing eleven. Alex Carey, who was dropped in the last T20I, is expected to pick himself this time around. The top four are locked in David Warner, Aaron Finch, Steve Smith, and Glenn Maxwell, whereas the choice at No. 6 needs to be made between Marcus Stoinis and Mitchell Marsh. Adam Zampa will hold the duty in the slot of spin, whereas the pace troika of Pat Cummins, Mitchell Starc, and Josh Hazlewood is the likely combination. 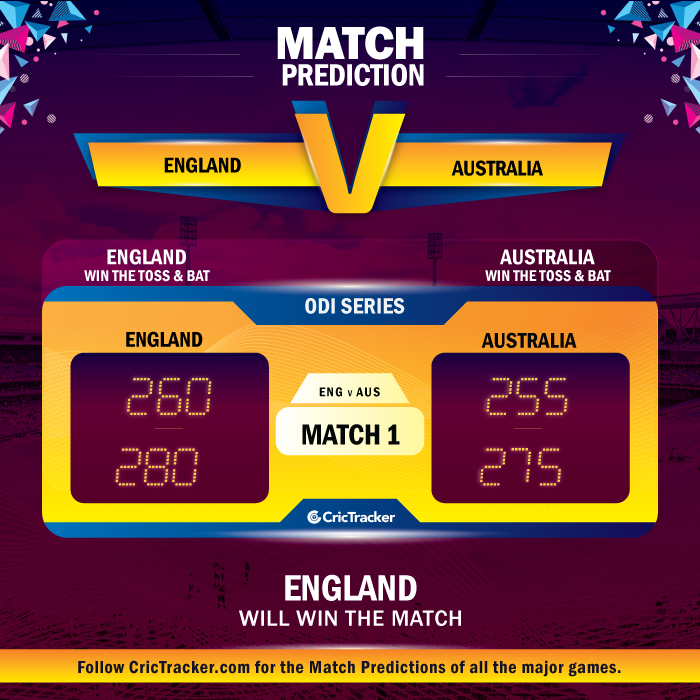