'I was taken to terrorist ward' - Sreesanth recalls his arrest in spot-fixing case, also reacts to Sushant Singh Rajput's death

‘I was taken to terrorist ward’ – Sreesanth recalls his arrest in spot-fixing case, also reacts to Sushant Singh Rajput’s death

Sreesanth even revealed that it was a torture for him during that time, especially when he was isolated from his family. 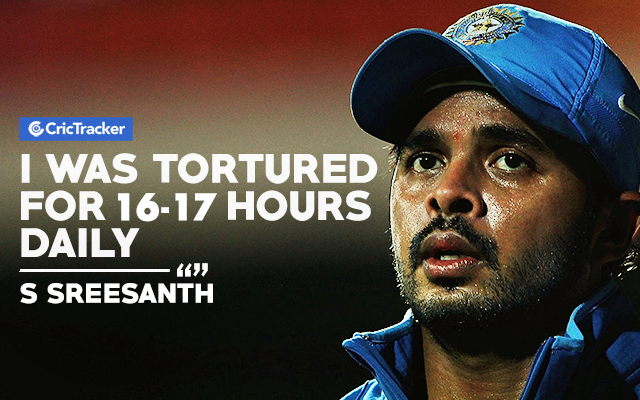 An aggressive attitude combined with a fiery run-up and lethal pace– Sreesanth had it all to cement his place as one of the most impressive Indian pacers. The Kerala pacer was also a part of the MS Dhoni-led title-winning side of 2007 T20 World Cup and 2011 ODI World Cup.

While donning the Indian jersey in 27 Tests, 53 ODIs and 10 T20Is, 37-year-old Sreesanth scalped 87, 75 and 7 wickets respectively. He has also plied his trade for Kings XI Punjab, Kochi Tuskers Kerala and Rajasthan Royals in the IPL.

However, his career took an unexpected turn after the Supreme court imposed a life ban on him for his alleged role in 2013 IPL spot-fixing. The life ban was cut short to seven years but the whole incident certainly hampered the mercurial pacer’s career.

Talking about the expectancy of life, Sreesanth, in an Instagram Live with CricTracker, revealed how his life took a drastic turn after he was taken to the terrorist ward after being arrested. He even revealed that it was a torture for him during that time, especially when he was isolated from his family.

It was a torture for me for 16-17 hours per day: Sreesanth

“If you look at my life, it was a fraction of second, it was the after-match party, I was taken to the terrorist ward, I felt I was being made ‘Bakra’. For 12 days, it was a torture for me for 16-17 hours per day. I was always thinking about my house and family at that time. After a few days, my elder brother came to visit me and then I got to know that my family was fine. My family members motivated me and were really behind me,” Sreesanth told host Adarsh Raman during CricTracker Instagram Live.

“On a serious note, winning every battle is important, everyone is fighting their own battle. Even if Sachin Tendulkar scores century in a game, he will bat from zero in next game. Think for 10 seconds before you take any decision, you should know that ‘this too shall pass’. Just achieve whatever you want to achieve, don’t wait for what the world says,” he added.

Sreesanth also reflected on Sushant Singh Rajput’s demise, which had stunned the entire nation a few days ago. The Bollywood actor’s suicide news spread like wildfire on social media and Sreesanth was also shocked after hearing about Sushant’s sudden death.

“I was training at that time, my wife messaged me, I didn’t check it at that time. Later, when I was in my car, I got a voice mail from my wife and I thought it was ‘mazak’. When I heard different voice mails, I got to know it was true, many were circulating his pictures on social media.

Luckily, no one clicked me going to jail or coming out of jail. Luckily, my kids will not see such pictures. I felt sad on that day (Sushant’s demise day),” said the 37-year-old.