The 12th edition of the ICC Cricket World Cup will kick off on May 30 with a game between hosts England and South Africa. A total of 10 teams are taking part in this tournament the final of which will be played at the Lord’s on July 14. All the teams will be playing against each other in a round-robin format with the top four teams making it to the semifinals.

Bangladesh is one of the many Asian teams to take part in the edition. The team is participating for the sixth time in the showpiece event since they made their debut in the England WC in 1999. They went on to beat Pakistan in their debut WC and stunned India in the 2007 edition to make it to the Super Eight stage. In the 2015 edition, Bangladesh defeated England but lost to India in the quarterfinals. In total, the side has played 33 matches in the World Cup, winning 11, losing 21 while one game was inconclusive.

Here we take a look at how the side has done in the World Cup over the years:

World Cup 1999; failed to proceed beyond the group stage 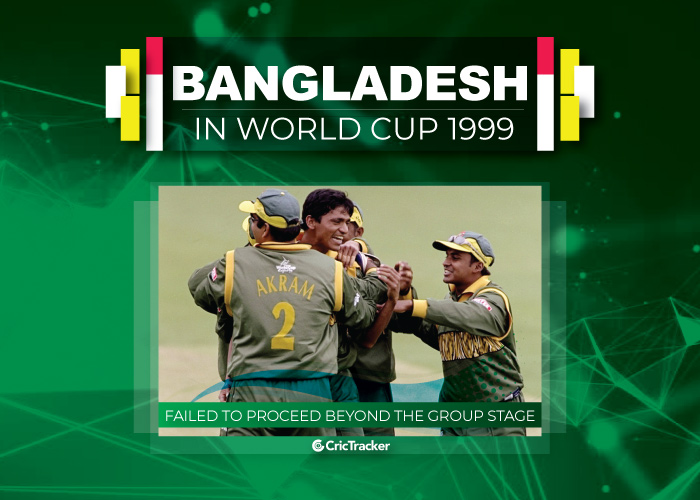 Aminul Islam was the captain of Bangladesh in their maiden World Cup in England in 1999. They were clubbed in Group B with Pakistan, Australia, West Indies, New Zealand, and Scotland. Bangladesh took off with a shaky start with a 6-wicket loss against Kiwis followed by another slump to the Windies by 7 wickets. However, the debutants won two of their final three games, first stunned in-form Pakistan by 62 runs. The other team they won against was Scotland, who also made their debut in 1999 WC. Bangladesh’s third loss came against eventual champions Australia by 7 wickets and they finished fifth in the group of six.