After a slew of concerns over his recent form, Virat Kohli has roared in with two back-to-back 70-plus scores to zip up his detractors in some style.

In a series of quickly changing fortunes, India will be out against England within 48 hours of taking an eight-wicket beating in the third T20I of the series. A dominant, career-best 52-ball 83* from Jos Buttler led England to gun down 157 runs with 8 wickets in hands to take a lead of 2-1 in the five-match series. Having made a comeback after losing the opening encounter of the series, India made a solitary change in their eleven, as they slotted in Rohit Sharma, benching Suryakumar Yadav, who made his debut in the previous game but did not get an opportunity to bat.

After England opted to chase, some searing pace bowling from Mark Wood and Jofra Archer rattled the Indian top-order in a strangely similar way as the first T20I. With both openers Rohit Sharma and KL Rahul back inside the pavilion alongside Ishan Kishan, Rishabh Pant ensured that the rut was stopped through a 38-run fourth-wicket stand alongside skipper Virat Kohli.

However, a greedy attempt off a misfielding proved costly as Pant failed to make his ground and was dismissed run-out for a 20-ball 25. While India struggled to find momentum, some late acceleration from Kohli (77* from 46), who notched up his second half-century of the series and added 70 runs from just 35 alongside Hardik Pandya, took India to a respectable total of 156/6.

Out to chase a tricky target, England struggled themselves courtesy of the tight and disciplined efforts of Bhuvneshwar Kumar and Shardul Thakur. Although, it did not take too long for Jos Buttler to break the shackles after his team’s sedate start, as he got into his groove and took the attack to the opposition during his 58-run second-wicket collaboration with Dawid Malan after Yuzvendra Chahal accounted for Jason Roy’s wicket early.

India’s search for a wicket continued till the 10th over, and although Washington Sundar struck to get Dawid Malan stumped as he was trying to step out, Jonny Bairstow joined forces with Jos Buttler as the two finished the chase with 10 balls to spare.

After the first two games were played on black-soil decks, the previous one was held on red soil. Virat Kohli admitted that the track was “slightly tacky” and that the ball not coming onto the bat as nicely. To go by the trend so far, scoring runs on the surfaces has not been easy unless the batters have spent a reasonable amount of time in the middle. It is fair to expect the same again. Given that on each of the three occasions the chasing team has ended on the correct side, the choice at toss is, quite obviously, a no-brainer.

After a slew of concerns over his recent form, Virat Kohli has roared in with two back-to-back 70-plus scores to zip up his detractors in some style. In the previous fixture too, while each of the Indian batsmen struggled to come to terms with the conditions on a sluggish surface, Kohli played the situation and acclimatized himself before shifting to the fourth gear. With the Indian skipper in his elements, there is little to look elsewhere for a top-performer.

If Virat Kohli’s aggressive 77 was sensational, Jos Buttler’s 83 was breathtaking. Having gotten a fair bit of clue of how the track was behaving, Buttler did not take too long before blasting in his spectacular style as he swayed the momentum towards his team in no time. He was involved in two 50-plus stands and his knock was the pivot of England’s chase. Expect to fire on all cylinders again. 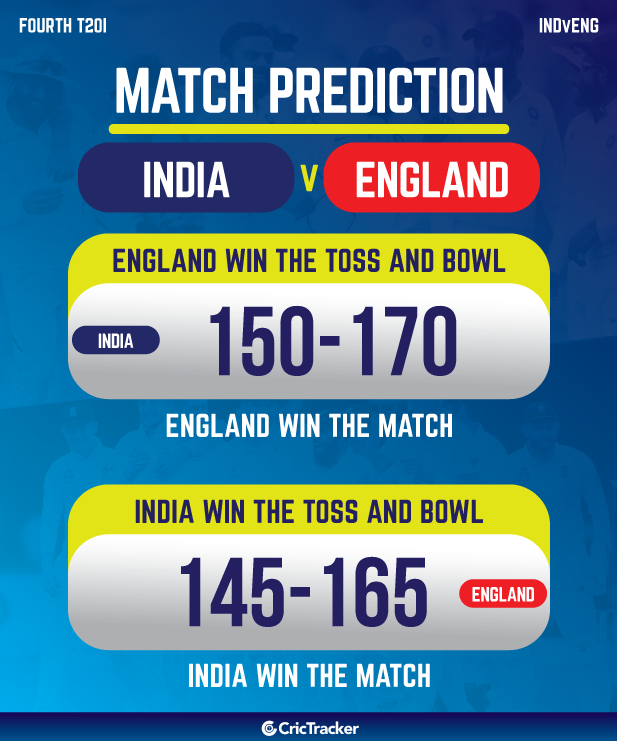