All the details which you should know ahead of India's first-ever Day-Night Test match.

2. Attendance and Ticket Pricing for the match: 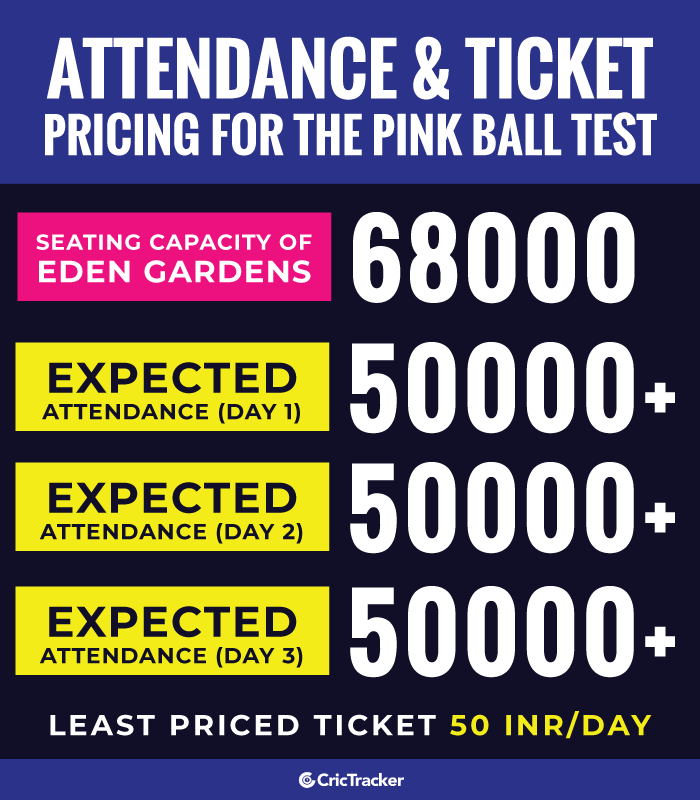 The new BCCI President Sourav Ganguly is making necessary arrangements to make sure there will be a huge turn-up at the Eden Gardens for the historic day-night Test match starting on November 22nd. Ganguly, who also hails from Kolkata, is incidentally the President of Cricket Association of Bengal (CAB) as well. He has been in this role for nearly four years as he was elected for the first time in 2015.

Inside one month of his tenure as BCCI President, Ganguly made the moves in bringing back the idea of D/N Test match. He now has ensured there will be an attendance of more than 50000 during the first three days of the match. The ticket prices for this game have been brought down to as low as Rs.50. The current capacity of the Eden Gardens is around 68000 which is said to be a lot higher in the past decades.

The renovations to the stadium made for the 2011 World Cup have brought down the seating capacity here. The venue had a capacity of 40000 prior to the 1987 World Cup but was raised to an unverified figure. There were reports of attendance crossing 1,00,000 during various high profile matches in the 1990s including the infamous 1996 semi-final between India and Sri Lanka.