A must-win game for both the teams in their bid to make it to the playoffs.

After sliding to three successive defeats, Punjab find themselves in a tricky spot. Likewise, Kolkata have only a solitary win to show in their previous 7 games. Both teams are locked at 5 wins from 12 games and occupy the 6th and 7th spot in the points table. With a spot in the playoffs still in their sights, both teams must win the remaining two league games to stake a claim. The last time both teams collided earlier in the season, Kolkata secured a comfortable win which will give them an upper hand when they travel to Mohali to face Punjab on Friday.

With Gayle, Narine and Russell expected to participate in this game, there will be no shortage of firepower. If you are selecting a fantasy team, try and sneak in every three of these, if you are still left with enough credits, include KL Rahul, who has scored more than 500 runs this year. The Mohali surface will offer assistance to the pacers which the likes of Mohammad Shami and Harry Gurney could exploit. With the competition for places in the qualifiers getting complex, expect this contest to be a high-scoring thriller.

Captain: Russell is only 14 runs short of tallying 500 runs for the first time in an IPL season. To score that many runs at an average of 69.42 and a strike rate of 207.69 shows his unbelievable form coupled with sheer consistency. He is fresh from a brutal unbeaten 80 which he scored while batting at No. 3. With Kolkata needing to up their NRR, they may promote him again in this game which will provide another opportunity for him to score a big one.

Vice-Captain: For the second successive seasons, Rahul has amassed more than 500 runs and looks far from done. With Kolkata not quite having the experience in their pace attack, Rahul will look to go hard in the Powerplay. He will be motivated to topple Warner from the top of the most run-getter’s list.

Shubman Gill’s return to form augurs well for the Kolkata side since Lynn is having a middling season. His pristine 76 against Mumbai was a perfect platform for the power hitters to explode at the end. He will look to do an encore and help his team get ahead in the race of qualifying for the final four. 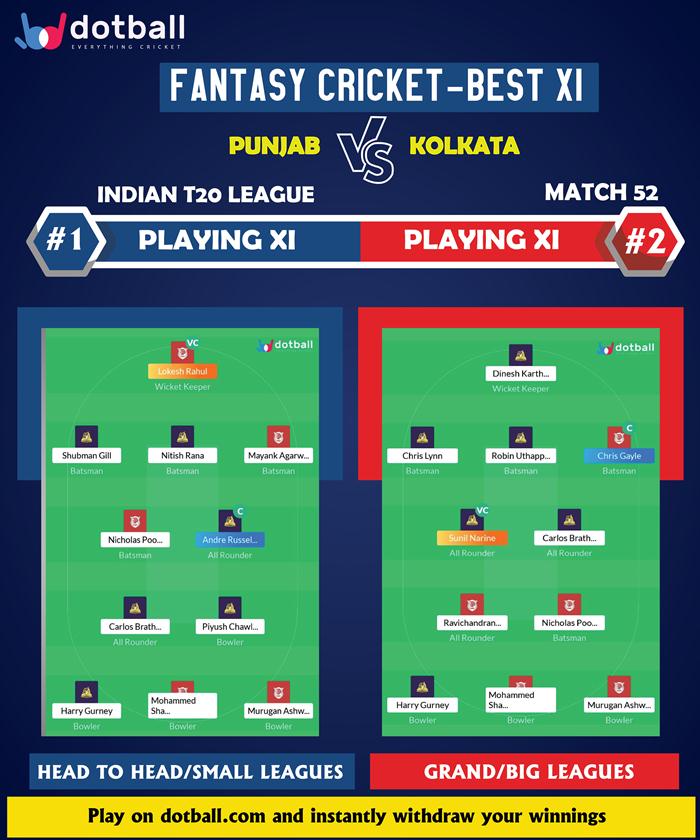 Captain: Out of 11 innings, Gayle has only 3 scores of under-20 this year which speak volumes about his consistency. His strike rate of 161.73 further reflects his impact. He usually takes his game a notch higher in the business end of the tournament and Punjab need his prowess more than anytime before.

Vice-Captain: Sunil Narine has picked a wicket each in 10 games and has also scored a few runs at a blistering strike rate of 166.27. Kolkata might not use him too much with the bat but will rely on his fast cutters at Mohali.

Pooran’s addition has given Punjab a new lease of life in the middle-order. He can up the ante as soon as he strides out to the middle and does a neat job behind the stumps which gives Rahul some breathing space as well.

Dotball is the way to win big with your knowledge.

Ashwin’s returns in this IPL has proven many people wrong about the effectiveness of an off-spinner in the shortest format of the game. With the stakes at an all-time high, Ashwin will raise his game even more and is likely to produce the goods for his side. 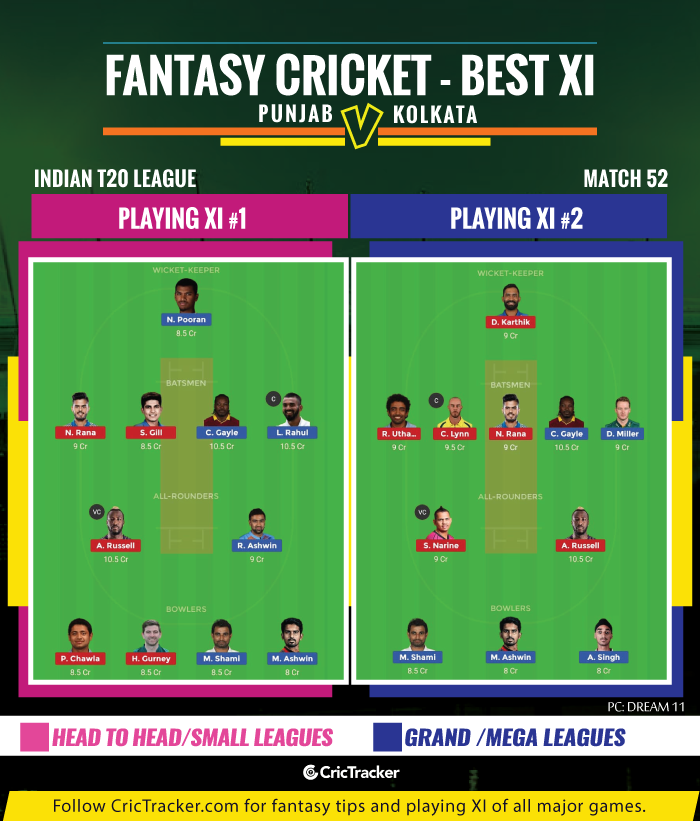 Karthik has scored 112 runs scattered across two games without getting dismissed. His return to form makes him a valuable pick as he provides stability and the willingness to play big knocks.