Among the most recognizable players, CSK gave away INR 7.8 crores for the services of Kedar Jadhav.

The Chennai Super Kings is all set to make a comeback to the IPL roster this year. They have started off their preparations, albeit on paper, in a fine fashion. CSK has certainly managed to bag a lot of quality players at the IPL 2018 auctions. Over the years, team Chennai has arguably been the most consistent side in the tournament history. Led firmly by the veteran Indian cricketer MS Dhoni, they have managed to feature in the playoffs of each and every edition of the tournament that they have played in thus far.

And now, the yellow army would look to continue on their good run yet again. At the auctions, the Chennai Super Kings seemed to have missed the trick early on. They roped in a lot of overseas big names and domestic stars. However, they failed to get the key names in the bowling department and in the opener’s slot. They were seen playing the catch up business towards the end of the IPL 2018 auctions.

Unlike most other teams, Chennai Super Kings were firm in their decisions about the players they wished to retain for the IPL 2018. They retained three Indian capped players and shelled out a big amount to do so. CSK retained their skipper MS Dhoni, who is likely to lead the side in the tournament yet again. They also retained the services of veteran cricketer Suresh Raina, who had been with the team since the first edition. Ravindra Jadeja is the third player retained by the franchise.

CSK looked very economical with their buys. A lot could be related to the fact that they had a lower amount left in their wallets after shelling out the big bucks for retaining players. Among the most recognizable players, CSK gave away INR 7.8 crores for the services of Kedar Jadhav.

Among the overseas cricketers, West Indies all-rounder Dwayne Bravo bagged a whopping INR 6.4 crore deal from the Chennai franchise yet again. Former Australian cricketer Shane Watson was a top buy at INR 4 crore in the list. The surprising name among the high end bids from the CSK camp was that of Karn Sharma. The leggie fetched a big sum of INR 5 crore at the auctions.

Chennai Super Kings used their RTM to get back South African batsman Faf du Plessis at the auctions. They gave away INR 1.6 crore to get his services onboard one more time. They seemed to have lost the plot by not bagging an opener in their side. They corrected the same in the final set of auctions where they roped in Murali Vijay and Sam Billings.

While CSK faltered in the batsmen department, they seemed to have overloaded their truck with all-rounders. They have picked up big all-rounder in Shane Watson and Dwayne Bravo. They had some very good cheat deals in Mitch Santner. The Indian names flooded the list too in the all-rounder’s list.

Chennai Super Kings need not worry much about the wicketkeeper slot. They have the services of MS Dhoni – who is rated as the best in the business. Apart from Dhoni, they have Ambati Rayudu, Sam Billings, and Kedar Jadhav who could do the job in Dhoni’s absence.

Arguably the weak link in the CSK lineup is the bowling department. They have failed to get act correct here. They did manage to rope in Lungisani Ngidi but the bowling does look bleak. Veteran Indian cricketer Harbhajan Singh will have to step to the occasion. Among the domestic lot, Karn Sharma and Shardul Thakur are the big names. 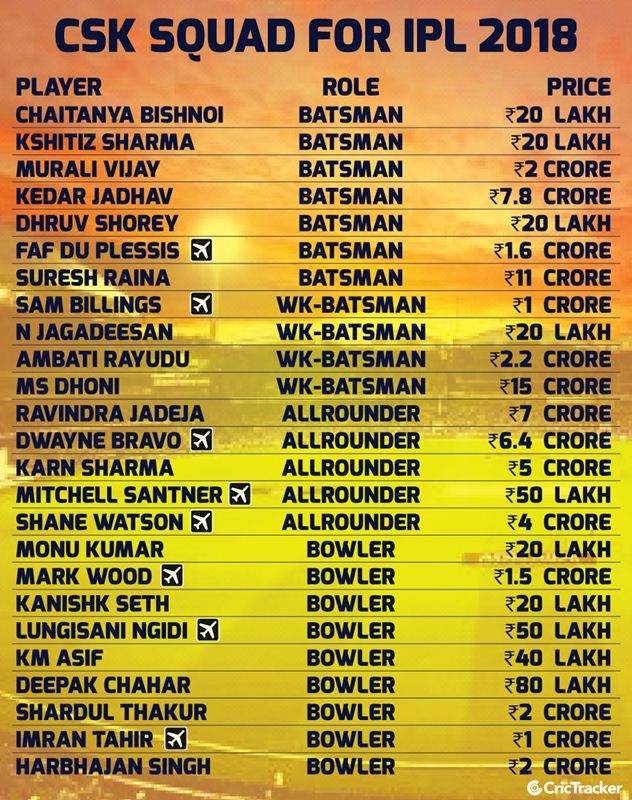 For more updates on the IPL Auctions, follow CricTracker.