KKR will face SRH in the second qualifier now.

The odds were somewhat stacked against the Rajasthan Royals (RR) prior to their match against the Kolkata Knight Riders (RR). The Royals’ record at the Eden Gardens wasn’t all that great, however, bearing in mind the significance of the contest, they couldn’t have been ruled out completely. While the rain threats loomed large over the contest, the Eliminator was slated to be yet another entertainer.

The toss was expected to play a crucial role as the dew was earlier speculated to settle in with the progression of the encounter. Also, the conditions at the iconic venue generally favour the team batting second. Hence, it wasn’t a surprise that Ajinkya Rahane won the toss and elected to have a crack at the Knight Riders’ batsmen. The decision definitely didn’t backfire, at least in the first 3.4 overs.

In the first ten overs, teams generally look to build the platform to propel the score to a substantial one. KKR were in the damage-control mode after the first 22 balls itself. Sunil Narine’s dismissal was understandable for the reason that the same attacking approach has earned him more runs than even the likes of Rohit Sharma. The Trinidadian cleared his front leg and spanked Krishnappa Gowtham for a boundary.

In the next ball, Gowtham brought his experience of bowling inside the field restrictions into play. The off-break bowler pitched the ball wide outside the off-stump and it spun sharply. Narine couldn’t reach the ball and missed it completely. Heinrich Klaasen took the bails off in a flash and completed the formalities. Robin Uthappa looked jittery in a lot of matches and it wasn’t any different today.

Shreyas Gopal was stupendous in the last encounter and he carried his form into this game as well. The tweaker tossed the ball up, which gripped the surface. Robin tried to work the ball on the leg side. However, the spongy bounce of the track meant that the ball reached Uthappa late. The batter closed the face off the bat way too early and the ball took the bat’s leading edge to trace into Gopal’s palms.

The wicket of Nitish Rana was nothing short of hara-kiri. Jofra Archer dished out a full-length ball and the left-hander tried to heave the ball through mid-wicket. He didn’t get hold of the ball whatsoever and Jaydev Unadkat pouched a dolly inside the circle. Chris Lynn’s wicket was similar to that of Uthappa’s. Barring Dinesh Karthik and Andre Russell’s blitz, KKR would have landed way short of what they were able to achieve (169 runs).

Sanju Samson is a batsman who relies more on timing rather than brute force, yet he can smack the leather a country mile. Clearing the short boundaries at Eden wasn’t a tough task for Samson, which he did for a couple of times. He came in when Rajasthan had lost their top-scorer from the last match in Rahul Tripathi.

Rahane isn’t the hardest hitters of the ball and strains at times to accelerate the scoring rate. Hence it was paramount for Samson to chip in with the runs and also not allow the required rate to escalate. He didn’t play a single shot out of anger, yet he scored at a strike-rate of 131.57 and that speaks about the potential of the youngster. In the last 20 balls, RR needed 44 runs.

The target wasn’t insurmountable by any stretch of the imagination. Someone from the Knights needed to put his hand up and tighten the screws on the visitors and it turned out to be Piyush Chawla. The leg-spinner hurled in a fullish delivery and Samson went for the pull shot. It’s the same shot which has got him out on quite a few occasions and even this time he perished to the same stroke.

The ball hung in the air forever, cluttered Javon Searles’ mind who was underneath the ball. Nevertheless, he kept his calm and grasped the white-cherry without much fuss. The wicket turned out to be the final nail in the coffin of Rajasthan’s chances to progress further.

In the last 19 balls, the visiting team could only manage 18 runs as Klaasen and Gowtham flung their willow, more in hope than with conviction. The absence of Jos Buttler and Ben Stokes was definitely felt, and Rahane’s men can’t dismiss the same completely.

Rating of the Match: 5 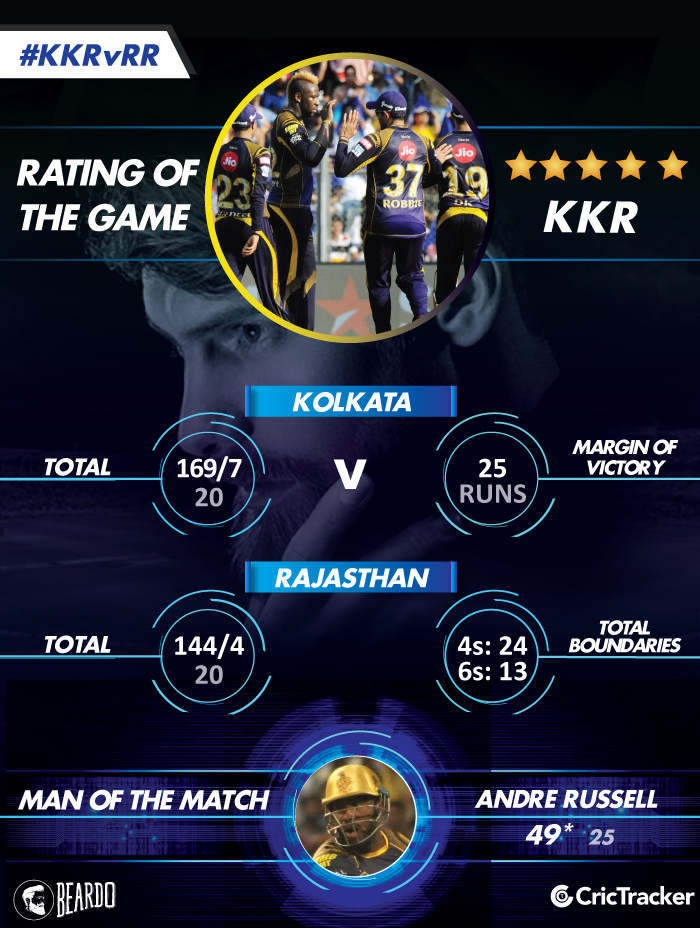