They now will face a challenging task against the Royal Challengers Bangalore ahead and they cannot afford to bow down here.

It was a catastrophic afternoon in Indore for the Kings XI Punjab, who got hammered quite badly in the hands of the Kolkata Knight Riders. Despite landing 6 professional bowlers in the XI, they ended up conceding a humongous 245 runs on the board, which extended their losing streak to three games this tournament.

Virender Sehwag, Brad Hodge and Ravichandran Ashwin have a lot of thinking to do ahead of this crucial encounter. They now will face a challenging task against the Royal Challengers Bangalore ahead and they cannot afford to bow down here. RCB are coming off a thumping win against Delhi Daredevils.

The Kings are seemingly out of contention to finish in the top 2, with Chennai and Hyderabad a good distance away from them. But losing this game can sabotage their plans of making it to the playoffs as well, which will be one of the greatest disasters in the history of IPL. Here’s the predicted XI of the Punjab unit for this all-important clash.

The undisputed King of T20 cricket, Chris Gayle has time and again proven his class in the shortest format. After a wonderful start to the campaign this year, Gayle has failed to amass big numbers, much to the disappointment of their fans. Gayle is an important member of the side and a big score from his bat is mandatory for their chances of winning.

Arguably their best player this season, KL Rahul has been one of the best players this season, amassing runs at will. He once again fought a lone battle in that humongous run chase against the Kolkata Knight Riders, but the game was pretty much done and dusted after his dismissal. He’s also eyeing for the Orange Cap this season.

Karun Nair got some decent knocks in the first half of the tournament but has struggled ever since. He’s a class act and the management will not be considering to drop him by any stretch of the imagination. Aaron Finch is another valuable addition in the side, but is due a big score for the franchise.

Mayank Agarwal has failed to replicate his domestic season exploits in the IPL this season, which eventually led to his sacking. He got an opportunity once again in the KKR game, but was dismissed for a first-ball duck. Manzoor Dar might be taking his place in the XI for this game.

Axar Patel was added back to the playing XI after keeping him aside for a few games. He failed to deliver in the game against KKR and was one of the many bowlers who got slaughtered by Dinesh Karthik and company. He was decent with the bat, but will have to buck up with the ball to keep up his place.

Ravichandran Ashwin has been outstanding this season, not just as a captain and a bowler, but also as a batsman. His valiant effort in the end against KKR ensured the defeat margin wasn’t too big. It’ll be interesting to see how he will motivate his side to do well after such a horrendous show at Indore.

Andrew Tye currently holds possession of the purple cap, doing full justice to the whopping amount paid by the franchise to earn his services in the auction. Mohit Sharma’s position in the side is in danger after his recent performances and if he fails to perform well in this game, Ankit Rajpoot might take over his place for the rest of the season.

Mujeeb Zadran suffered an injury during the match against KKR and was taken off the field for a few overs. He didn’t look very convincing after coming back and got hammered by Dinesh Karthik. Barinder Sran needs some wickets after his name to keep his place in the XI and it’d be fair to say he has been mediocre this season. 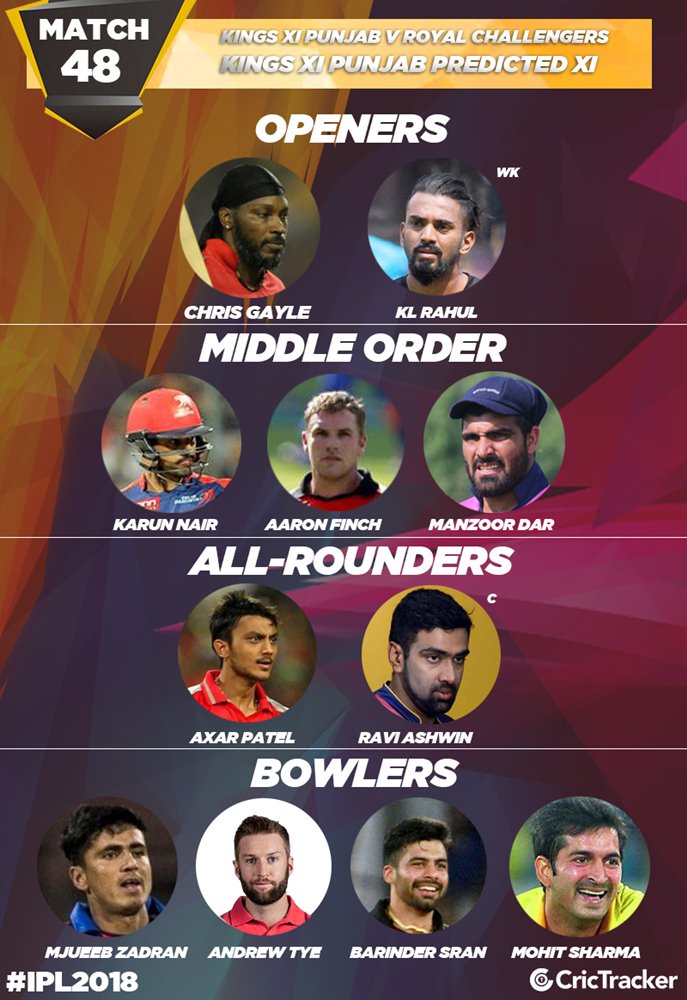